Newsletter
Sign Up today for our FREE Newsletter and get the latest articles and news delivered right to your inbox.
Home » Quaker State x LRM ’68 Impala Pt. 6 – Layin’ Down Lines 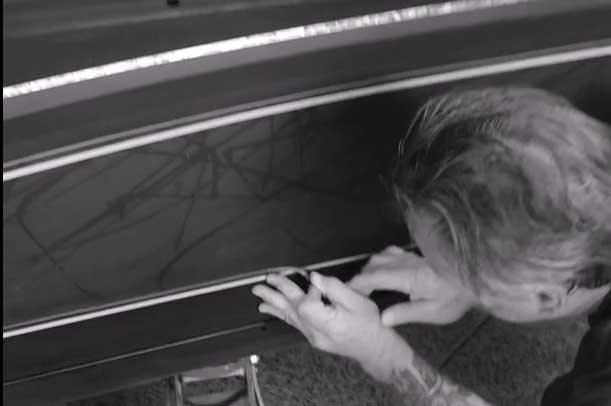 In the previous installment of our Quaker State x LOWRIDER Magazine ’68 Impala build we saw PPG’s Paul Stoll add a personal touch to the Impala by applying some Jackson Pollock-esque drip patterns. With the paint and the patterns laid down it’s time to do some pinstriping.

We enlisted Pete “Hot Dog” Finlan of Hot Dog Kustoms to handle pinstriping duties for the Impala. If Pete’s name sound familiar it should be. He’s as famous as they come when it comes to pinstripers. Throughout his almost 40-year career Pete has won numerous awards and has been featured in several publications and TV shows as well as being head painter at West Coast Choppers during the “Monster Garage” era.

Check back soon for more progress updates on the Quaker State x LOWRIDER Magazine ’68 Impala and don’t forget to subscribe to LOWRIDER’s Facebook and Instagram pages and follow the hashtag #LOWRIDERQS68 for more on the build.