Newsletter
Sign Up today for our FREE Newsletter and get the latest articles and news delivered right to your inbox.
Home » PPG At SEMA 2019 #MTSEMA19 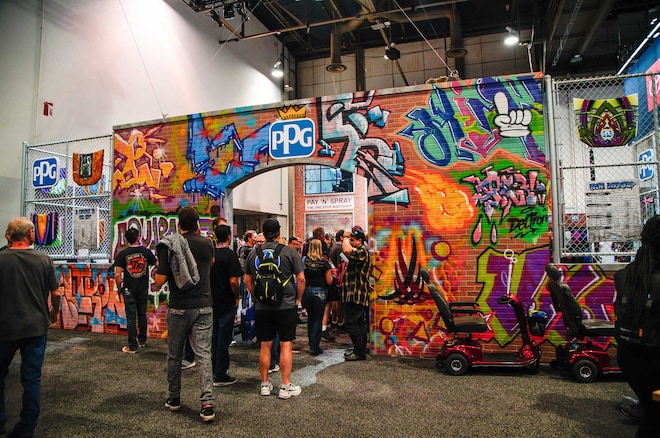 In an ever-changing industry like the automobile world, the bar is always being raised. Every year, exhibitors at the SEMA Convention work tirelessly to bring out the best of the best. The crowd-favorite booth for PPG was no exception. Their one-of-a-kind display took on an urban-theme and showcased 3 custom cars designed by the industry’s top painters, including a 1959 Chevy Impala, painted by Pete of Hot Dog Kustoms, a 1963 Chevy Impala painted by Ritchie Valles at Unique Twist, as well a 1968 Cadillac Eldorado painted by non other than PPG’s very own Paul Stoll. Alongside the gleaming paintjobs, were a series of customs painted and, even muraled hoods hung gallery-style throughout PPG’s 2019 display. PPG told us they gave their artists freedom to get creative, while raising the industry standards this year. And they did not disappoint! In addition to the artistic displays, PPG also hosted the paint world’s biggest stars for fans to meet, including Marl Worman, Will Scott, Charley Hutton, and Bobby Alloway. Masterful paintjobs, coupled with celebrity painter meet-and-greets, turned this year’s PPG SEMA booth into an attraction no one could miss.