Newsletter
Sign Up today for our FREE Newsletter and get the latest articles and news delivered right to your inbox.
Home » Miranda’s Custom Cars – Arizona’s Iconic One Stop Customizing Shop 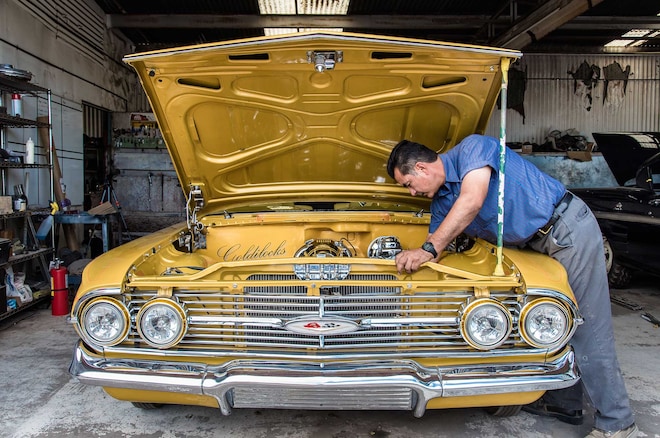 As a Phoenix native, Luis Miranda, owner of Miranda’s Custom Cars got his start working on cars by helping his father at the age of 8. A few years later, Luis began his first project, a ’55 Chevy Bel-Air that was left abandoned in his back yard. He’d paid for the Bel-Air build with money earned from roofing and digging graves with his dad. The build led Luis to require help from his neighbor, Mando Narvias who was the owner of Mandos, one of the top lowrider paint and interior shops in Phoenix at the time. With perseverance and hard work, the car was completed after 4 years. This working relationship would be the beginning of bigger things to come…

One day, Mando called looking for Luis’s brother for some temporary help at his upholstery shop. Luis’s brother wasn’t home at the time, so Luis offered to take his place. Mando immediately saw Luis’ potential and allowed him to do the upholstery on a car he’d been working on. You might know the car as Brandy Madness, the very first Lowrider Magazine official Lowrider of the Year. Luis was only 19 at the time he’d help complete the interior of Brandy Madness and this experience would lead to a decades-long career of custom car building. Luis has a list of high -quality builds, which include- Rug Burns, Unfinished Business (LRM cover car) and Rags to Riches (LRM Center fold), to name a few.

After the Lowrider of the Year build in 1988, Luis designed and built a trendsetting interior for an ’80’s regal from Spirit car club which included a waterfall, bubbling water tubes, cut mirrors, and colorfully directed lights. That car went to the L.A. Super Show and won best interior for 1989 and at that point, Luis decided to start his own shop the same year.

By this time, Luis had quite the following of car enthusiasts. His clients asked him to start painting cars as well and over the course of the next 30 years, Luis continued to build award winning show cars which received countless trophies.

Having prior mechanical knowledge and experience from his father, Luis was able to meet the challenge and expand the scope of his work to achieve full builds, including customization and restoration, making his shop a “one stop shop” and a big convenience to his customers.

Luis spends the majority of his time with his hands directly on his client’s cars ensuring the highest levels of craftsmanship and artistry. Although Miranda’s focuses on top quality Lowriders, their scope of work has expanded even further to include high-caliber cars and trucks across varying genres. Examples include classic European restorations, ultra-high-end muscle car restorations and other custom creations. These cars have been featured at shows like SEMA and are spread across the nation and abroad.

Luis credits his parents, for making the sacrifice to come to the U.S. and ultimately provided the opportunities that exist here today. They were born in the 30s and went through bad times during the Great Depression. Luis’ dad was a car lover who inspired creativity and instilled persistence in him at an early age. Luis is especially grateful for his parent’s example of high-principles and work ethic to become the person and businessman that he is today. Particular appreciation goes out to Mando who gave Luis his first opportunity to work on cars professionally, which opened the Lowrider world to Luis like no other could. His primary business commitment is to his clients, many of who have become good friends in the process.

Over the years, his growing clientele has provided Luis with plenty of business experience and the opportunity to express his art through their cars. He is grateful that they rest their trust in him and provide the opportunity to expand his talents and build trendsetting cars. The 1959 and ’60 Impalas featured here are just two of Luis’ creations completed in his shop. These complete builds are a snapshot of the hundreds of street and show quality rides that carry Miranda’s branding. Currently, Luis cruises the 1960 to shows himself because it’s his own ride. Just one of dozens he has built for himself during the past 30 years.

A One Stop Lowrider Garage