Newsletter
Sign Up today for our FREE Newsletter and get the latest articles and news delivered right to your inbox.
Home » 1984 Chevrolet El Camino – Back Bumper 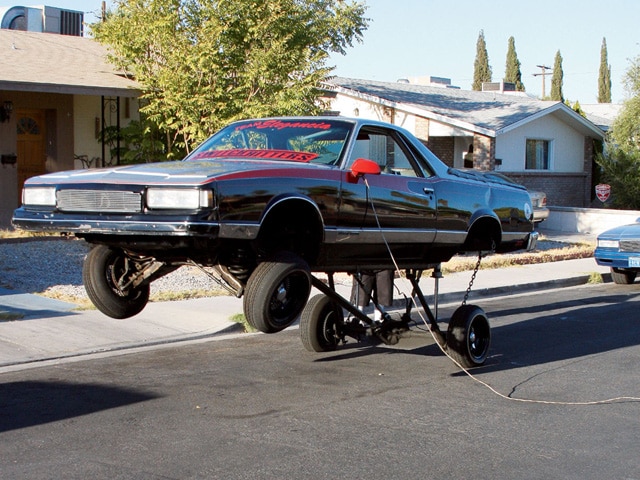 Ever wonder how Lowriders make their way into our back bumper section? Well, it’s real simple with the help of today’s digital camera technology. You can be like Arnold Robles of Las Vegas, Nevada who sent us over a couple of images of his ’81 El Camino, “The Bully,” in action. After seeing it firsthand, we knew we had to feature it for our no limit hydraulic section.

Arnold was originally looking for a luxury sport Monte Carlo, so he began collecting parts, as he had his mind set on building the perfect one. Halfway through the build, his friend called him about an El Camino theft recovery that was for sale. It was “a steal” and coincidentally, it was missing a front end. Arnold jumped on the opportunity and decided to build a Euro Sport El Camino. Six months later, Arnold’s conversion was completed.

With 16 batteries and 4 pro hopper pumps installed by Switch Hitters, this El Camino bullied its way to the top. Since being completed, the Bully has been the car to beat in Sin City. After two years of dominating the hopping scene, Arnold felt bad pushing around the competition and took a little break to let other hoppers have at it.

If you have a hydraulics setup that hits back bumper or is making you “go for broke,” email some images along with basic information to: saul.vargas@sorc.com