Newsletter
Sign Up today for our FREE Newsletter and get the latest articles and news delivered right to your inbox.
Home » Harley-Davidson – Born In East L.A. 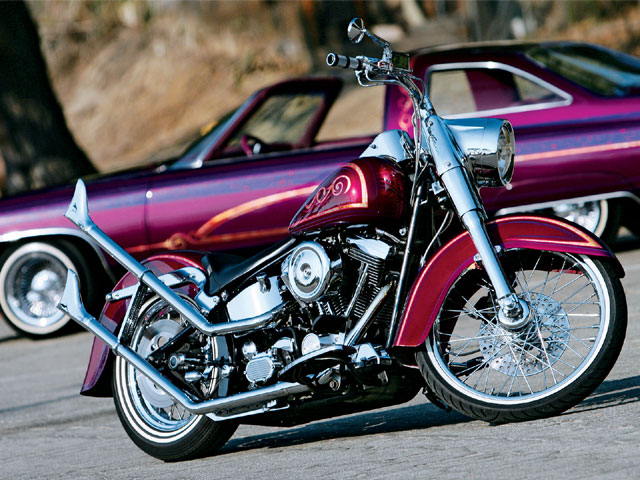 Meet Mr. Brunik Mendoza, who grew up in East Los Angeles, California, in the Winter Gardens neighborhood near Olympic and Laverne back in the 1960s. In the neighborhood was Johnny’s Wheel Alignment, which was where the local guys had their springs cut or heated to turn their cars into lowriders. There was also an American Legion dance hall on the opposite corner that held weekly weddings with lowriders chauffeuring the bride and groom.

Brunik was influenced by one of his neighbors who drove his Harley-Davidson to work every day. It was a stock full-dresser and Brunik always knew when his neighbor returned from work because he could hear the bike coming down the street. At the time, he just liked the way it sounded since the bike had no mods done to it (no chrome or bright colors) unlike the lowriders that would show up at the American Legion Hall for weddings and dances.

One day, the neighbor stopped riding it. Brunik didn’t know why; maybe the man was too old to ride or his wife wouldn’t let him on it anymore. A few years later, a young man pulled it out of the garage and, like most chismoso kids, Brunik went over when they tried to start it. It took some time, but it turned over and roared to life.

A few months later, the buyer returned to the neighborhood on a shiny chrome-plated bike. Brunik asked him what happened to the bike that he had bought and the man told him, “You’re looking at it.” Brunik couldn’t believe it was the same bike. The new owner had painted it candy apple red and had chromed parts of the motor.

When Brunik was 16, his friends “Little Anthony”, Rudy and Mike met Richard Gonzalez AKA “Frisbee,” the first true biker that they had met. Frisbee had a chromed-out shovel-head with a custom wishbone frame that was very low. Brunik said to himself, “Now that’s a lowrider motorcycle.” Since money was scarce and he was already building a lowrider car for his other family, Lifestyle Car Club, Brunik had to finish that project before starting another. In the back of his mind, though, he was always thinking about purchasing a Harley, but it didn’t happen until some 10 years later.

The day finally came when Brunik purchased a brand new Heritage Softail and, just like the guy who bought his neighbor’s bike, he immediately started to remove parts and personalize it to his own taste. Thereafter, he was riding with his friends up to San Francisco and many other places.

Brunik’s friend Little Anthony had opened a paint shop called Community Auto Paints in East Los Angeles. He was a self-taught custom painter, and taught Brunik and others how to remove tanks and fenders, and sand down the original paint. Even though Little Anthony has now passed on, his legacy lives on through several friends, like Brunik, who bought Harleys; some of these guys even became custom painters. Looking back, Brunik sums it all up by saying, “It’s been a great life and a great ride!”