Newsletter
Sign Up today for our FREE Newsletter and get the latest articles and news delivered right to your inbox.
Home » Lowrider of the Year – 2005??? 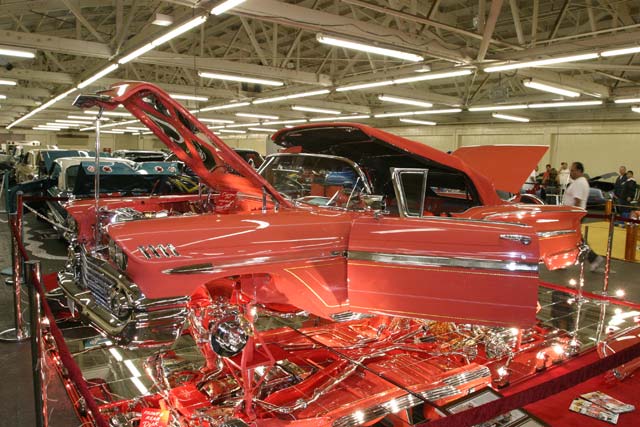 Throughout each year’s Lowrider Magazine Tour, the momentum builds up to the grand finale Super Show in Las Vegas, Nevada. On average, the tour stops in about 15 cities throughout the U.S. before descending upon “Sin City” in October. At almost each of these pre-qualifying events, some of the best lowrider cars are awarded the “Excellence” award, which is sort of like the “Best of Show” award. Some Tour stops have no recipients to win the Excellence award as it’s very hard to obtain. It takes the best of the best to get it!

Those who do get the award are most likely going to try to compete against other Excellence award winners at the Vegas Super Show for the coveted “Lowrider of the Year” award. This award goes to the best lowrider car of the year and in particular of the Super Show.

In 2002, this LOTY award went to Favian Garcia of Rollerz Only Car Club for his radical custom ’78 Monte Carlo. In 2003, Favian fell just short of the getting the award again and lost to Alejandro Vega with his crazy custom ’79 Monte Carlo known as “Orgullo Mexicano.” But the following year, in ’04, Favian had added a few new customizations which were just enough to regain his LOTY title!

This year, the rumor is that Favian will be out of the running for the LOTY, but Alejandro is definitely competing. It might not be such a easy win for him and his custom Monte as there have been a plethora of other nice rides that have turned up at some of the ’05 Tour events. One of the top contenders is Anthony Fuentes of SouthSide Car Club with his “Sun Dance” yellow ’63 Impala convertible. Anthony has won many Excellence awards throughout this year’s Tour. Another contender could be Bowtie South’s ’64 Impala “Certified Gangster” from the Dade County, Florida area. Joe Barba from Southern California has also won an Excellence award for his ’63 Impala from Premier Car Club. Last August, the San Francisco Tour stop Excellence winner went to Faustino Flores for his efforts on his ’58 Impala.