Newsletter
Sign Up today for our FREE Newsletter and get the latest articles and news delivered right to your inbox.
Home » LR Roll Models Ep. 37: Johnny Gonzalez – Turning the Tables 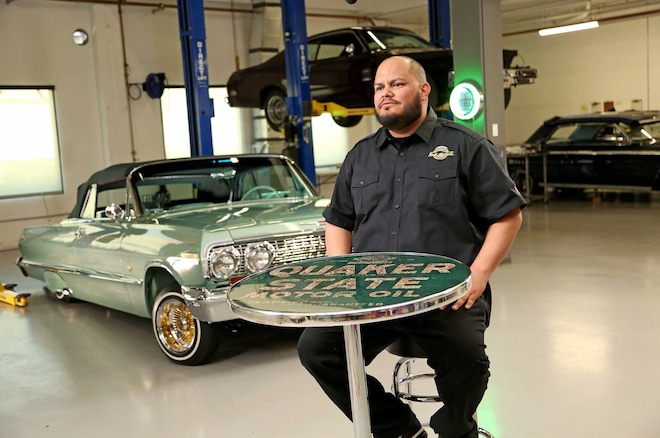 Johnny Gonzalez is a man who wears many hats. A curator, teacher, and advocate for ethnic studies, Mr. Gonzalez is fueled by his passion for lowriding and giving back to the community. But life wasn’t always this good.

Having been around lowriders all his life, he was fortunate enough to have been blessed with a 1963 Impala when he was just 12 years old. Sure, he might not have been the legal age to drive but he was fully capable of customizing it, and this was his foray into a once short-lived lifestyle.

In the early ’90s, gang activity in Coachella Valley was at an all-time high and Johnny became part of that scene. After getting into trouble multiple times, and even after getting shot, there seemed to be no punishment effective enough to change his behavior—that is until his parents decided to sell his lowrider. It was a day he’d never forget, and one that he’d soon revisit once he put his life back in order.

Fast-forward to the present day and Johnny is a changed man. Mr. Gonzalez now seeks to repair and improve the community he lives in. When he’s not taking part in charitable programs, such as the Puente Program (a nationwide program helping increase the rate of underrepresented students attending college), he’s either mentoring children from surrounding communities or maintaining his 1963 Chevy Impala, which he refers to as his “gallery.”

“I’m the curator for my gallery and my vehicle is the gallery that showcases the many talented artists who helped execute my vision,” Johnny says. Yet in as much time as it took for him to get his lowrider to where it is today, the same can be said of the life he now lives.

His infectious tone and empathy toward the kids he helps is genuine. You see, the past that once haunted him is now the key to his ability to connect with these children, and his experience on the streets allows him to empathetically build a connection that is unique and rare. Head over to YouTube and catch the latest segment of Roll Models, sponsored by Quaker State and Shell Lubricants, because it’s another human interest story that was built to encourage others to live a life of greatness while achieving their full potential.