Newsletter
Sign Up today for our FREE Newsletter and get the latest articles and news delivered right to your inbox.
Home » Lowrider Events and Motorsport Showcase Head Judge Danny Ochoa 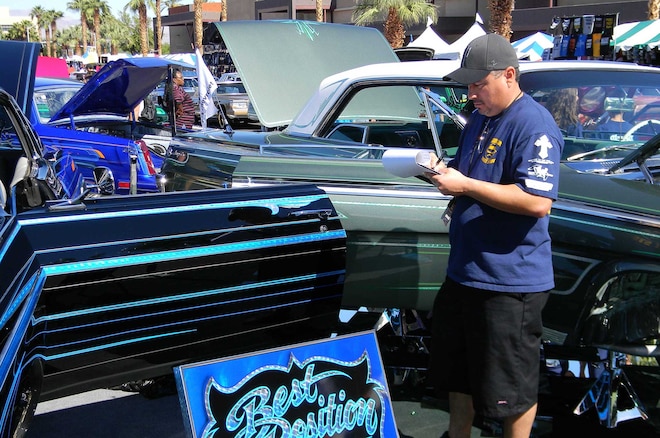 Danny Ochoa has been part of Lowrider Magazine and now, the Lowrider Network brand for over thirty years. As Head Judge for Motorsport Showcase and Lowrider Events, Danny’s resume includes running car show judging teams from Los Angeles to Miami, Florida, and Lowrider Tour stops in between. He has his signature on every title holder since Klique Car Club’s Lethal Weapon and Punch 84 hit the show floor! It’s been a colorful career for us all, and Danny has managed to keep a cool head even at times in very hot seat position.

Being a car show judge isn’t for everyone. In fact, during the past 30 years, only a handful of judges have made it to retirement before they stepped away from carrying a clip board to every show.

During all this time, Danny has quietly worked on his own sixty-four Impala that he purchased right out of high school and has been part of a well-respected car club from Mesa, Arizona. Society Car Club has had a full agenda most years hosting the Mesa Super Show, being a go-to member for the hundreds of community events and car shows, and, from 2000 to 2010, Danny was the club President of Society Car Club. All this while raising a family and being married to Mandy, the love of his life, for the past 35 years. Oh, and in order to finance his sixty-four and care for his family, he’s had a successful career as a now retired Solid Waste Superintendent with the City of Mesa.

Danny’s introduction to Lowriding started as my younger brother, hanging around when I had my sixty-four Impala. He got his first car show rush when I took him along with me to enter my first car show in Phoenix, back in the mid ’70s. It was just him and I and he wasn’t even a teenager yet, but as my young carnal, he was my shotgun rider. I was surprised that my sixty-four took second place lowrider at the show. When we got back home from the car show, he grabbed the trophy and ran in the house yelling to our parents that we placed! I saw this light go on for his first time and that was special for me as well.

Since that experience of Danny going to his first car show, I can’t recall a time when he wasn’t with me during the past forty-five years, whether detailing out my full show Monte back in the day or debuting his impala as an original award winner. Though Danny first built his impala as an original, he transitioned it to a hard mild, to semi-custom now named Caliente 64. Though he wears many hats as one of our Motorsport Showcase Managers and Head Judge for Lowrider Events, Danny’s experience stretches out in all aspects of car shows, car clubs, and event production.

So, in his spare time, Danny has continued to keep Caliente 64 cruising the streets and part of the Society Car Club line up. He continues to practice what he preaches. Now as one of the clubs elders, younger members rely on his advice and experience in building their own dreams and keeping the club standards. As Society celebrates forty years of Lowriding and Danny enters his 3rd decade of working for Lowrider and Motorsport Showcase, his work ethics reflect his play habits. He has always strived to represent what he believes in, to the best of his abilities, and knows that building your own ride to drive your passion is what you should preach. Build it for your eyes.