Newsletter
Sign Up today for our FREE Newsletter and get the latest articles and news delivered right to your inbox.
Home » LOWRIDER Roll Models Episode 12: Joe Ray 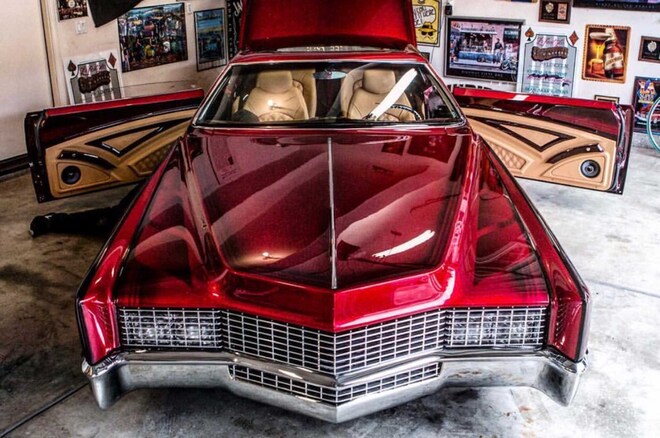 Regardless of your parent’s occupation or income, there’s always a good chance they don’t want you in their given field. That guidance and often-informal advice comes as the result of years of experience—and it’s not so much that they don’t enjoy your company but rather it’s advice that comes from the heart. In short, it’s dished out of concern and the desire for us to lead better lives.

That said, our next feature’s father was in the trucking industry. Day and night he worked hard to provide for his family, all while setting his sights on giving his son the opportunity for the best education to eventually attend a university. But life—much like any project car—tends to provide its own detour from time to time, and that’s exactly what happened here.

This is the story of our Editor-in-Chief, Joe Ray.

Upon graduating high school, Joe was granted a full scholarship for a Commercial Arts program at a local university. It was the things dreams were made of, and art was what he breathed and lived for, so for him it was good news. From color palette to form and function, art brought forth a new sense of passion for our featured guest, but of course, life had other plans for him.

The introduction of a child, and the start of a new family, turned the tables on his plans and instead of going to a university he followed in his father’s footsteps and began driving trucks in order to support his family. Yet as fate would have it, he was attending Cantwell High School just a few blocks away from Whittier Boulevard. During the early ’70s, the streets and neighborhoods through East L.A. offered him an informal education that let him play with the legends on the streets.

The discovery of lowriding gave him the ability to put his lifelong passion for art in motion. Using cars as his canvas, he worked with colors and body modifications, which allowed him to create his own choice of automobile styles, like big-body American Classics.

Since then, he’s put together and crafted some of the most legendary cars in the lowrider game. Those cars, with such classic names as “Dressed to Kill” and “Las Vegas,” have gone on to become timeless classics that will go down in lowrider history as among the most noted. But as we take an introspective look into his life—both past and present—there’s only one thing he may regret: The fact that his father never got a chance to see him taking on a corporate job as the Editor-in-Chief of Lowrider magazine.

In this touching episode of Roll Models, we pay a visit to our Editor Joe Ray and talk about life, lowriding, and how the lessons he learned paved the way to his dream job.