Newsletter
Sign Up today for our FREE Newsletter and get the latest articles and news delivered right to your inbox.
Home » LOWRIDER Roll Models Ep. 45: Rick Solis – You Know The Drill 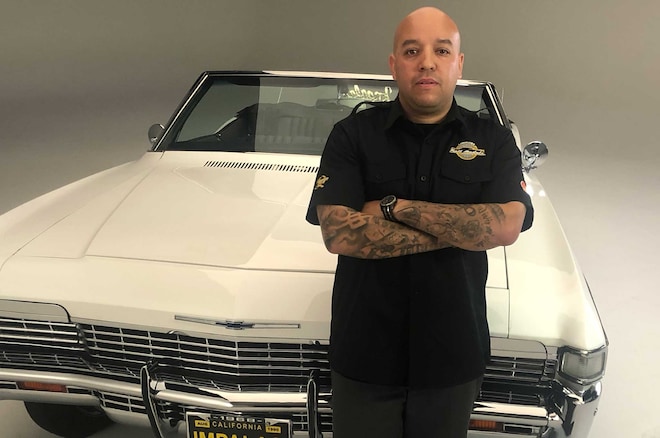 Divorced parents, hard times and a poor work ethic at school might sound like the descriptive traits of a child destined for trouble, but not for Rick Solis. These were merely obstacles he had to overcome while growing up in Chicago, and, thanks to his parents, he’s not only pushed forward against the grain, but utilized those hardships to transition to adulthood with a solid foundation and a bright future.

Knowing that he had trouble in school, Rick’s father didn’t berate him with lectures and insults. Instead, he taught him about the power of math and how it’s relative to much of life. Rick took that advice to heart and soon realized that math was actually all around us. In the years that followed, Rick enlisted in the military 6 months before high school graduation, and soon found himself operating as an air assault trooper serving terms in Baghdad, Saudi Arabia and Afghanistan. During that time he would endure several concusions and lose some good friends, but Rick remained focused and powered through the ordeal.

Fast forward to present day and Rick currently serves as a Master Sergeant with 22 years of faithful service under his belt, while simultaneously pursuing his college degree. As he reflects on his time in the military, he admits that one of his dreams was to come back from his service and build a lowrider that might one day be feature-worthy for Lowrider Magazine. Now as a member of Impalas Car Club (El Paso), he whips around in a cherry ’67 convertible Impala that’s landed him in the spotlight as the first Lowrider Roll Models episode of the new decade. Shoot over to our YouTube channel right now to check out our latest episode featuring Rick because it’s packed with an incredible story that will truly inspire.

Celebrating the Life of Kita S. Lealao, a Lowrider Legend