Newsletter
Sign Up today for our FREE Newsletter and get the latest articles and news delivered right to your inbox.
Home » LOWRIDER Roll Models Ep. 33: Randy Perez – Playing With Fire 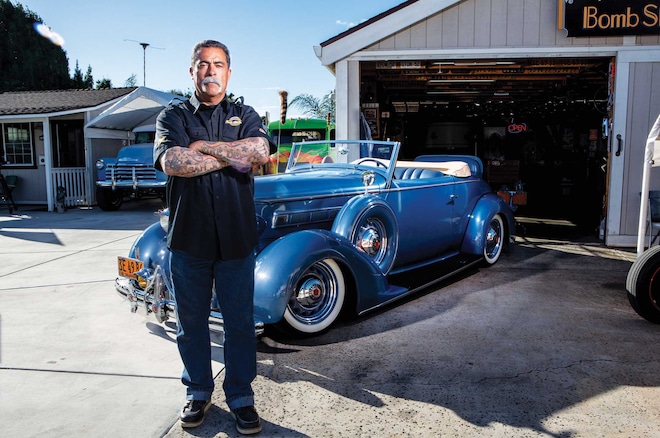 Tucked away at the end of a cul-de-sac sits a modest home with a manicured lawn. It’s the quintessential example of a home that represents the American Dream, but gain entry past the wooden gates and an adult Disneyland awaits. This is the home of Randy Perez and it’s an automotive utopia that speaks volumes about his fascination with custom cars, highlighted by a 1936 Packard 120 convertible.

Raised by a single mother, Randy was no stranger to the vices of being a young adult, but it never stopped him from exploring his options. He was seeking better opportunity and a more vibrant life, so he explored many job paths before chasing a high-speed, high-temp life as a fireman for the San Jose Fire Department. Now retired, he looks back at his trials and tribulations and his story is one that revolves around drive and determination. It’s an inspiring piece that proves once again that fortune favors the brave and as he continues to remain a frontline soldier and advocate for lowriding, he talks about extinguishing the negative stereotypes often associated with lowriding. So catch the full scoop on this month’s roll model, sponsored by Quaker State and Shell Lubricants. You won’t be disappointed.