Newsletter
Sign Up today for our FREE Newsletter and get the latest articles and news delivered right to your inbox.
Home » LOWRIDER Roll Models Ep. 32: Stephanie Bueno – A Friend To All 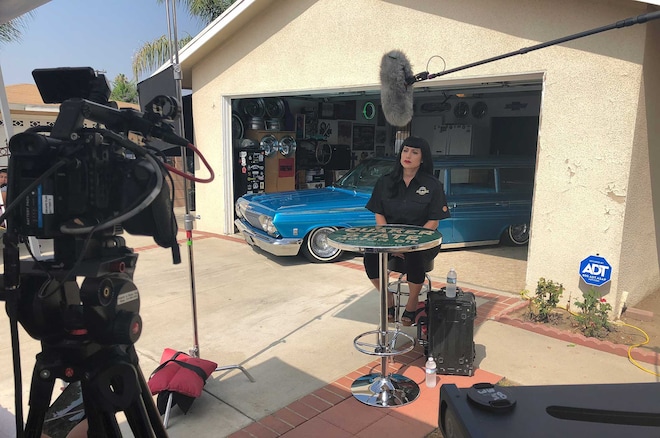 “Lowrider culture is very genuine and family oriented; there aren’t enough words, and no way of expressing all of my sincerest thanks to every single person who helped build this beautiful car,” Stephanie Bueno says, as she talks about the wagon that was built for her late husband and best friend.

After losing her childhood sweetheart to stomach cancer, her fairy tale may have ended, but his chariot remains a marker in time and a memento of the man we knew as Jae Bueno. A loving father, husband, great friend, and collector of all things die-cast, Jae was known for his infectious smile and ability to snap a great picture.

An IT executive for Hewlett-Packard, he spent much of his free time obsessing over die-cast cars and photography. His passion was clearly contagious and after starting a website to chronicle his top-choice collectibles, it turned into a gig penning his own column for Lowrider Arte. Soon thereafter, he went on to become a freelance photographer for Lowrider magazine, and during that short time he not only created a striking portfolio but forged deep relationships in both street wear and the world of lowriding. He was a crowd favorite, a man with a kind heart, and those who had the honor of meeting him are all too familiar with his trademark greeting, “Hi friend.”

But his love for capturing lowriders was contagious. He became a contributor to famed blogs, The Hundreds and L.A. Taco, was published in top automotive lifestyle magazines, and everywhere he went his wife, Stephanie, was at his side. They were an inseparable duo with a love for photography and what they created was a legacy locked in place by love, lowriding, and genuine compassion for the greater good.

While in her thirties, Stephanie went back to school to become a registered nurse, and after his death she became the foundation for the family and an extension of Jae. It was no easy task, but throughout it all she never gave up hope and has carried on his legacy. Now an RN at White Memorial Hospital in Boyle Heights, she remains a contributor to Lowrider. With her trademark smile she not only pilots the 1962 Impala wagon that was built for him but continues to be a historian for lowrider culture.

Though Jae never did saw the car completed, his legacy remains one that will go down in history, and as she continues to pick up where he left off, Stephanie Bueno has a story to share. You can get all the details in our latest episode of Roll Models, sponsored by Quaker State and Shell Lubricants.

The road to success is paved with failure and heartbreak and when you ask Derrick Perez, he will tell you that he knows this part of life all too well.

A passion project that helped one man get through a traumatic time in his life.