Newsletter
Sign Up today for our FREE Newsletter and get the latest articles and news delivered right to your inbox.
Home » LOWRIDER Roll Model Ep. 46: Louie Carrillo – Color My World, Humble 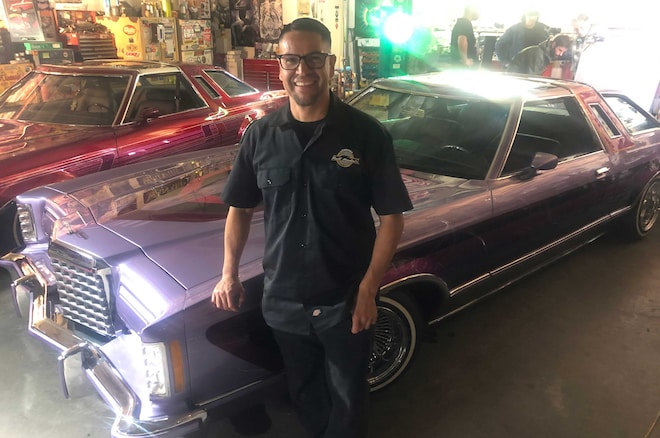 See some of Louie’s masterful work applied to our ’68 Impala.

As a custom painter, Louie Carrillo has built a reputation for being a creative force in the custom paint game. From candies to patterns, flakes to pearls, Mr. Carrillo is a respected part of the community and a notable figure in the world of custom paint. As an artist, his work is mesmerizing, and one of his finest pieces can be found on his own 1978 Ford Thunder Bird. Finished in a multicolored motif, Louie used a palette of lavender and magenta to create a vibrant display of paint accented by striping, candies, flakes and pearls.

Born in Michoacán, Mexico, Louie comes from a family that understands the struggle. In the early 80’s his parents left to go the States. They wanted to create a future for their children. As a result, Louie stayed behind with his brother and two sisters. They stayed with their relatives in Mexico and during that time he was 11 years old and wanted to earn his own money and refine his skills and that’s when he found a job that paid 100 pesos a week. With what little money he earned he used it to help out his uncle, aunt, and siblings, and this became a quick leap into adult- hood and it was from these experiences he learned to be humble, respectable and responsible. Once his dad and mom found jobs and were settled down with a house in the city of Riverside, Louie, his brother and sisters would join their Parents.

Then came school, and at that time, Louie didn’t speak English too well and found himself the victim of bullying. Time after time he’d find himself in the school cafeteria alone, embarrassed and often times crying, but after a few years of anguish he soon channeled his frustrations into his newfound passion for painting. He became so good at what he did, he became the go-to guy for locals who wanted their lowrider bikes painted. He started off using rattle cans and as time passed, his interest piqued and his passion for custom paint became an obsession large enough to shadow his former dreams of playing professional soccer. It also helped out to that his brother worked at an Auto body shop and was a painter to.

“It takes hard work to accomplish the things you want in life and it took 14 years of hard work to become both a craftsman and an artist” says Louie. During that process he learned different styles from various painters who served as “Roll Models” to him, and in the end, it was a culmination of hard work and all the input from master painters that helped create the style he has today.  Louie soon found himself interested in painting and he wound up spending every spare moment at the shop either lending a helping hand or soaking in all the action.

Louie would like to dedicate all of his hard earned work and accomplishments at becoming a LOWRIDER “Roll Model” to his daughters Tiffany and Camila and to his son Louie Jr.

To see more, hit the button below and be prepared to watch another Roll Model episode that’s here to inspire and educate.