Newsletter
Sign Up today for our FREE Newsletter and get the latest articles and news delivered right to your inbox.
Home » Lowrider Influences at SEMA 2015 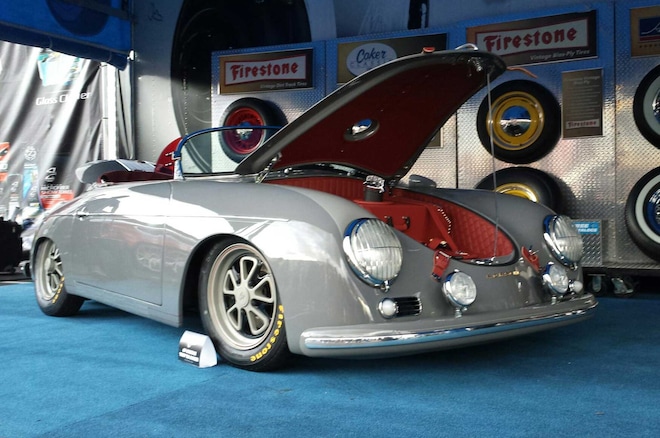 Yesterday, as I walked around the opening day of the SEMA Show, it was business as usual. From one meeting to the next I felt like a preprogrammed robot on a mission. Yet as I was talking to one vendor, I looked over his shoulder and found myself locked into a car that was sitting over at the Savini Wheels booth. The car, which was a 2015 Skyline GT-R, wouldn’t have normally caught my attention, but this one was engraved.

Once my meeting was wrapped up I walked over to the booth and I was more than impressed. Most of the front clip was engraved, but the highlights and details on the fenders and rear wing were done in even more extensive and detailed fashion.

Flown in from Japan, the car was created by KUHL Racing and it sports an incredible metallic finish/bodywork by “Artis” and he calls the car the “3D Ultimate Engraving Metal Paint.” As I pressed on for more information I found out that it has a custom body kit by Love Lark as well a limited-edition set of Black Di Forza Wheels by Savini.

While pictures do no justice to the vehicle, it’s impressive to say the least. It’s also pretty evident the build has taken on some cues from the world of lowriding. From laying it down low to the engraving, it’s exciting to see that we’ve influenced other niche markets of car customization.

In addition, it was nice to see the Porsche 356 Speedster that was sitting pretty at the Coker Tire booth. The gray Porsche was created by car builder “Slang 500” and it sports a set of custom-made Magnus Walker rims massaged onto a set of Firestone F560 radials. But what really caught my attention again was the attention to detail that Slang put into the interior. From all the chrome accents to the engraved fuel filler cap and front windshield pillars, it made me wonder what influenced the builder to add all those details. The answer was simply: “Lowriders.”

It turns out that John, aka Slang 500, is also an avid lowrider enthusiast who himself has an Impala that is currently in the works. With this much work and attention to detail in his build, it’ll only be a matter of time before he completes his Impala, and we can’t wait to see the end results. We’ll also be sure to do a follow-up feature on both of these vehicles.

In the meantime I encourage all of you to stop by our booth, which is located outside. In addition, take a look around and soak it all in. There’s a lot of great lowriders at the show, but I encourage you to check out all the rides. Just like the aforementioned Skyline and Porsche have been influenced by the world of lowriding, there are plenty of styling and performance cues that we as lowriders can implement into our own builds. Remember, creativity is what gives us vision, and inspiration is what gets us thinking out of the box.

Till next time … stay grounded.

If you’ve ever rebuilt a late model lowrider then you should be familiar with the name OPGI, or Original Parts Group, Inc.

At the 2019 SEMA Show Dynamat gave us a reminder of how important their paper-thin aluminum layers are for any build.

Coker has brought new life to the cherished 5/20 tire and at the 2019 SEMA Show they had quite a number of wheels wrapped in this iconic tire.