Newsletter
Sign Up today for our FREE Newsletter and get the latest articles and news delivered right to your inbox.
Home » Lowrider Garage Surrounded by Oldies 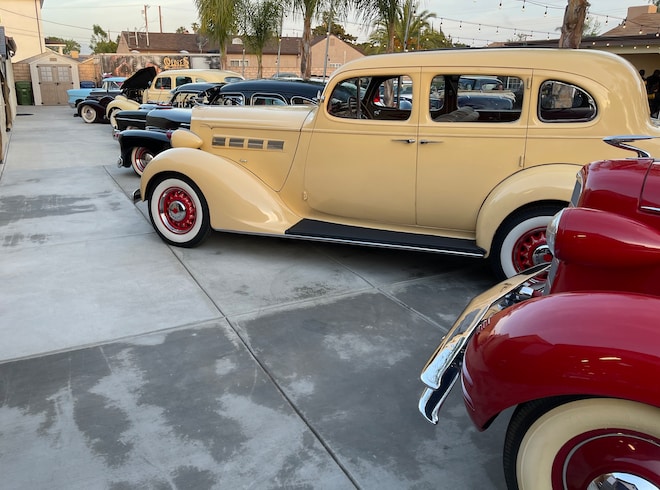 Lowrider Garage took a trip to visit the San Fernando Valley chapter of Oldies Car Club, where a huge backyard setting turned into an exhibit of bomb classic automobiles from 1960 and earlier. The Oldies have been around for over four decades and they have numerous chapters that represent an organization that has been showcasing quantity and quality early style vintage rides but mostly… consistently.

No brag, that’s just a fact! They have proven themselves to be timeless just like their rides when it comes to representing their legendary name. The Oldies have come a very long way to get to the top of the upper echelon of car clubs and their leadership standards come from Hall of Fame inductee Ricardo Alvarado, and his longtime partner and Vice Prez George Mirzoian. For years they’ve continued to fill up car show exhibit halls with a variety of masterpieces and the same thing can be said about their latest gathering which took place at George’s residence which has a long drive way and a huge backyard setting allowing for over 30 relics to lay down comfortably on his well landscaped grass.

There was no way possible to try and film this episode in one 35-40 minute segment, so we had to do a double take.. part one and part two. We wanted to capture all of their sixty- to eighty-five-year-old heirlooms and ended up going around in circles to talk over each ride and capture the era from which they came from.

Artilleries, visors, skirts, and treasure troves of accessories occupied each and every ride that flew the Oldies proud and traditional Old English designed plaque. Each and every owner gave us a tour of their proud year, make and model with a bit of history as well. We’ve got links to both episodes below and hope you enjoy the visit with this iconic club as much as we did!