Newsletter
Sign Up today for our FREE Newsletter and get the latest articles and news delivered right to your inbox.
Home » Lowrider Garage is back with a Punch! 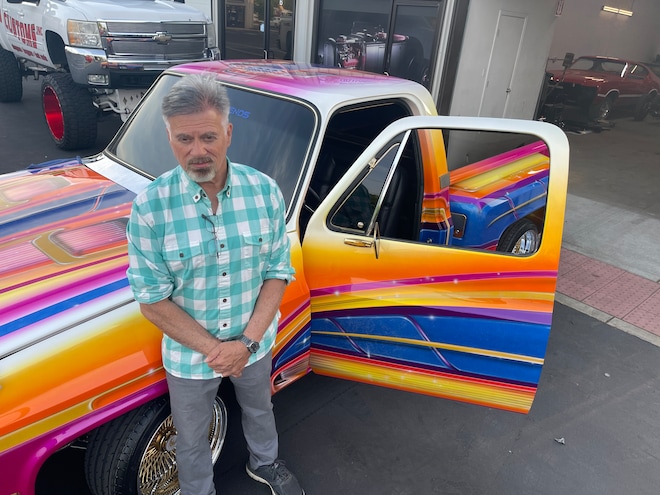 The Lowrider Garage series headed north to Lodi, Ca, to visit legendary painter Steve Fernandes, whose talents include candy and pearl fade-aways, color-blending, pin-stripping, air-brushing, and he’s even added the art of engraving to his repertoire as of late. He’s applied his talents to many award-winning lowriders and has filled many magazine pages with his colorful and creative styles as either cover or centerfold features.

One of the many famous and Iconic creations Steve had the pleasure of expressing his talents on was Kenny and Leroy’s Punch ’84. Back in the mid-90s, this truck was last seen loading up the famous “Lowrider Truck of the Year” 7-foot trophies, and there hasn’t been a sight of it in action for almost 25 years. Punch ’84 still looks like 1995 all over again and it hasn’t missed a beat either, and that’s a tribute to Steve Fernandes’ craftsmanship and experience as very few paint jobs last over 10 years.

Stay tuned this Friday as the Video Series captures Steve, Leroy & Kenny as they go back in time to compare custom builds and paint jobs and talk about how lowrider customization has influenced mainstream America over the past few decades Also, if you were there at the L.A. Sports Arena to see Punch ’84, only saw it in a magazine, or you’ve only heard old car show stories about it, tune in to the next Lowrider Garage episode to see this iconic truck live up to its claim to fame on Instagram Tv, Facebook, or our YouTube channel.  Don’t forget, there’s much more to see in the upcoming Lowrider Garage segments, including Cinco De Mayo’s Techniques car club fest, Thee Intruders, one of the oldest and biggest clubs in Arizona, and a special visit with some well-known names from Lowrider’s history: Rag Top Ralph, Frank the “Mad Hopper,” Elisio Estrada, “Blvd Nights,” and Ralph Compos from Raul’s Hydraulics. Stay safe and catch you all soon!