Newsletter
Sign Up today for our FREE Newsletter and get the latest articles and news delivered right to your inbox.
Home » Lowrider Garage Video Series Season 2 kicks off 2021 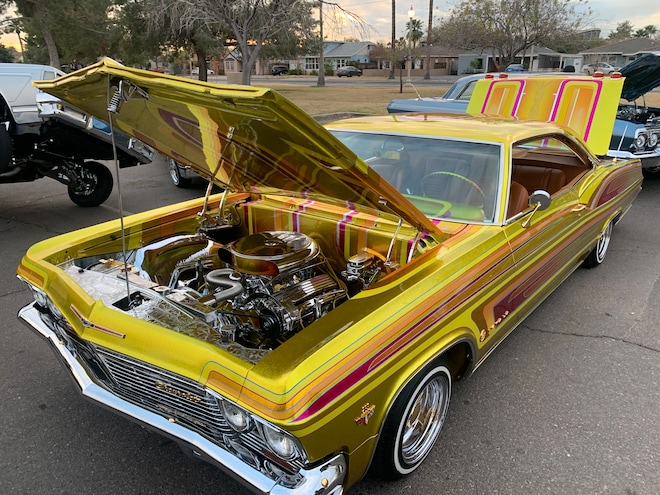 The Lowrider Garage Video Series season 2 opens up the new year with some Arizona Lowrider spirit. Part of our history in the Rolling Art Culture of Phoenix goes way back to the mid- 70’s, when pioneers like Joe Montenegro, a member of the Spirit car club in East L.A., moved to Arizona and brought with him his expertise in hydraulics. He opened up a business and a few months later, he started the Phoenix chapter of Spirit. Joe would eventually pass the reins over to Frank Castillo, who has more than upheld the club’s Image and standards set forth from the mother chapter, which continue to influence all other clubs – and not just in Arizona.

For over four decades they’ve had a consistent commitment that reflects a strong and positive image and represented all car clubs moving forward. We asked the Spirit car club if they would be willing to come out and represent themselves during these serious times of the pandemic. Upon notice, and with only a few days to gather enough cars and members with safety precautions intact, we met up at the local park in Phoenix.

Look back a decade ago:

Spirit has about 60 members and more than thirty show quality rides as we all know, but because of the times we’re in, just enough beautiful rides and dedicated members rolled on over to the place where Lowrider picnics and gatherings used to happen. We get their observations on how the pandemic has affected not just their club but all of the Lowriding community.

Hopefully this will be the year that things will go back to the way they were, because we have all suffered with the loss of family members, friends, and car club members as well. Catch the Spirit of Lowriding this Friday on Instagram TV, Facebook, YouTube and Lowrider.com as we begin a better year, God willing.