Newsletter
Sign Up today for our FREE Newsletter and get the latest articles and news delivered right to your inbox.
Home » 1979 Monte Carlo is Orange County’s Other “Big A” 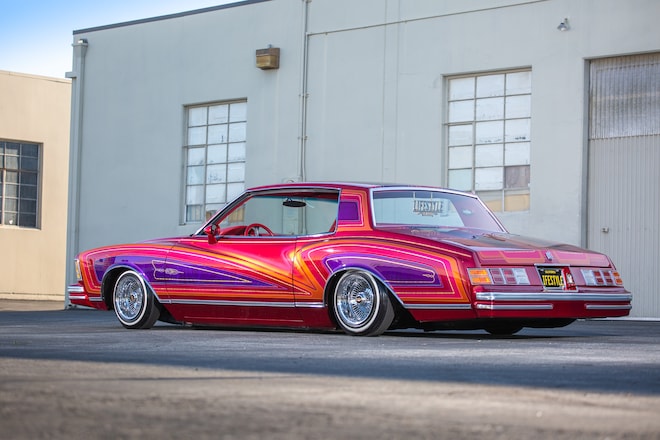 World famous Angel Stadium, located in the heart of Anaheim, California, is well known throughout the sporting world as the “Big A.” However, locals know of another Big A – one that cruises a whole different playing field on the streets of Orange County in his multi-colored ‘79 Monte Carlo.

Big Abraham Castro Ochoa is the humble and proud owner of this beautiful creation and it just happens to be his first ever Lowrider! During his high school days, Abraham did his best to always get in trouble and really needed to get a hold of himself and change the path that was taking him nowhere fast. He did eventually succeed in getting on the right track, as you can see with his feature, and he even nick named his ride “Stranglehold,” a song by rock guitar legend Ted Nugent.

Abraham’s father owned this Chevy Monte Carlo back in the days when it was a completely stock family car. The Monte was used for everything you can imagine, from grocery shopping, to work, school, and was even used to teach Abraham how to drive so he could get his driver’s license. Before leaving school, his Dad would make an offer to Abe as an incentive to clear his path and stay out of trouble. He promised him that if he could straighten things out and get his act together, he would give him the Monte. That was all Abe needed to change things drastically and make good on his end of the deal.

Big A first put the car away in a garage, while he went out to find a job that could support the responsibilities of owning a car that he would later trick out and turn into his dream car. Heavily influenced by the pages of Lowrider magazine while growing up, he remembered the many iconic G-Bodies that included Lifestyle car club’s well-known show car “Paradise.”  A number of Lowrider Magazine covers, and centerfolds featured Monte Carlos and those classic builds had a lasting effect on Abe.

We’ve Got More Monte Lowriders for You:

Not wanting to build his first lowrider as just a nice clean cruiser, Abe decided to go all the way to the top with a head full of ideas. He saved up his hard-earned cash while the car remained in storage, and when he had the right amount to build his vision of a full custom Monte, he unloaded everything he had into it.

The Good and the Bad

Candy flakes and pearls are laid out all over the body and the interior is wrapped in leather creation by California Upholstery. The style of this ride speaks for itself, especially when it’s slammed to the pavement on its Daytons which feature custom Lifestyle C.C. centers.

Abraham’s father, who is now in his 80s, unfortunately succumbed to blindness due to Diabetes. This brings tremendous pain to Abraham as he wanted his Dad to see the final result of the build as well as his dedication, hard work, and the gratitude he has for a father’s gift that ultimately set him on the right path in life.

Abe owes everything to his family and friends, especially his buddy Juan, who challenged him to customize the car to much greater lengths. Today, Big A is a member of Lifestyle car club and he proudly represents with his plaque posted up high in the rear window, and he never forgets his journey and how it brought him full circle.

Thank you “This Build is dedicated to my father who did everything to raise me and lead me down the right path in life – even gifting me his own car.