Newsletter
Sign Up today for our FREE Newsletter and get the latest articles and news delivered right to your inbox.
Home » Krazy Kutting – The Art of Engraving 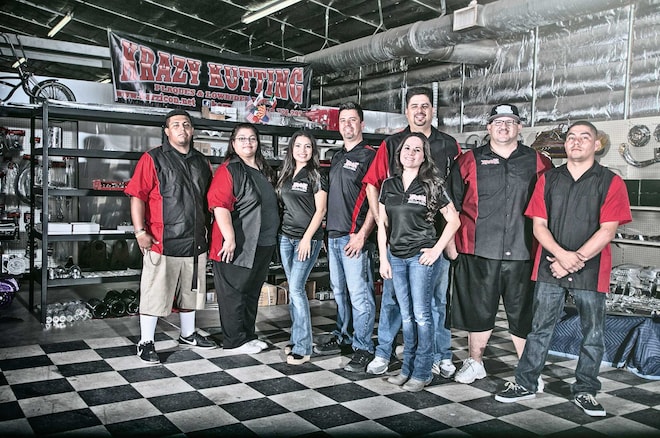 The art of engraving is an artform as old as man. It is a highly detailed process involving the skills of a true craftsman. The craftsman is responsible for creating unique images that sometimes have to be duplicated withexact precision over and over again. The popularity of engraving within the lowrider community has exploded within the last few years with Krazy Kutting at the forefront of this artistic “must-have” accessory. “This business almost didn’t come to fruition,” Armando Gonzalez says, reflecting back on how he and his brother Santiago “Santi” turned a three-year plan into reality. At the time, both brothers were enjoying well-paying jobs. One with a double major in business and the other working as a mechanical engineer, life’s responsibilities made it difficult to walk away from the certainty a corporate job provided each of them. The two would eventually hatch out a three-year plan that would allow them to transition into this family business.

Armando’s “Krazy Kreation,” which was Lowrider Truck of the Year in 2007, 2008, and 2009 would serve asthe catalyst for what we see today. “Back then we had to build our own parts,” Armando says, “and over time, more and more people would ask me to build parts for their own cars.” This would eventually lead Krazy Kutting to work on some of the industry’s top lowriders, such as Lowrider Car of the Year RM Series, Spirit Runner, and Freak Show of Los Angeles Car Club. Their client list also includes numerous A-list celebrities, like Paul Wall and the infamous Kid Frost. “We treat everyone the same,” Santi says. It is this simplistic business model that has allowed Krazy Kutting to be in business for over 11 years. A little known fact is that everything is done in-house. Their 11 employees, who mainly consist of family members, have access to a CNC machine, plasma water table, and laser-cutting machine. “All our engraving is done by us,” Armando says. Each one of us has gone through a two-year training and now we have in-house engravers and shaders.

Krazy Kutting however is taking the term “family business” to another level. Two of their engravers happen to be their wives, Karina and Isavra (and yes, that’s right, their wives). Even the mother-son duo, Lori and Anthony, help out with engraving and shading. Almost everyone in the family is involved in one way or another. Unfortunately, the cornerstone for this great family was taken from them too soon. A great mother, wife, and sister, Aracely, who was a Kuwait war hero, will forever continue to serve as the family inspiration.

“We are strategically located in Yuma, Arizona, allowing us to serve customers from all over the world … from Texas to Northern California, all the way to Hawaii, Spain, and even Italy,” Armando says. With plans of doubling in size, it is their quality and turnaround time that continues to set them apart from any “would-be” competition. With most items already in stock, they feature a variety of products, from custom plaques to necklaces. There isn’t anything they can’t do for their customers. “We feature everything from scroll work, diamond cutting, Aztec-style designs, as well as club logos,” Armando says. With new products in the works, such as custom billet grilles that have been in development for over a year, Krazy Kutting is continuously looking for ways to improve and provide their loyal customer with continued superior quality and better service.