Newsletter
Sign Up today for our FREE Newsletter and get the latest articles and news delivered right to your inbox.
Home » A Hopper With No Switch Man? 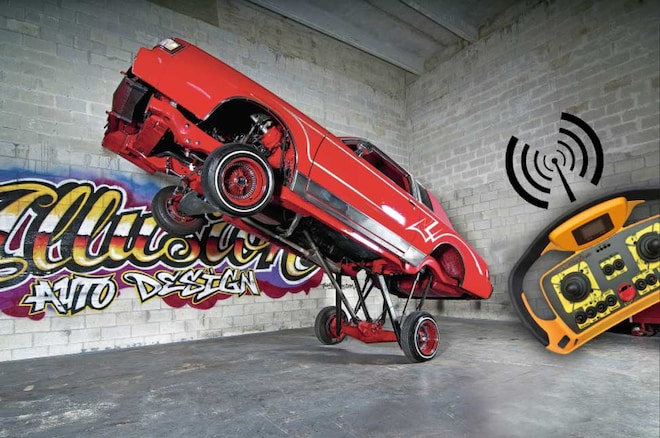 I know. It’s a random thought, but maybe not too far-fetched after watching Top Gear (Season 24 – Episode 5). In that specific episode they introduced a 700 hp, full carbon-fiber, futuristic race car that was designed by the guy who created the Tron Light Cycle. The concept car is one of a handful of cars that will be competing in a new race series and get this—the cars are driverless.

Yup. No driver at all. These robotic creations are supposed to race against each other and while some would say it’s missing the character and personality of the driver, it’s a glimpse into what may be coming in the near future and it got me thinking about lowriding (the hop scene in particular) and how the scene would change if there were no more “switch men” and if the controls were taken over by circuit boards that could execute the perfect timing thus creating the most efficient and highest hop possible.

Of course it would take all the personality out of hop competitions, but like they say, what we laugh at today may just become normal tomorrow. So before you write off the idea, just remember that you and I both know of a few homies who used to talk smack about IG and social media, but are now all up on it posting selfies and posing cute.

While watching the same episode, I also couldn’t help but think how lowriding has indirectly influenced car culture as a whole. We originally used hydraulic suspensions to lay our cars down low in the parking lot (a term the import scene now called “hard parking”) and we used adjustable suspensions to avoid speed bumps or to navigate rough city streets. So, to watch the Ford GT suspension dip down when “Track Mode” was activated was interesting.

To see the action of the suspension, evoke such a draw of emotion from the crowd was pleasing and to be honest it’s the same thing we’ve been doing with lowriders—albeit for a different purpose. Again, this is where innovation borrows ideas from other forms of car customization and it’s cool to see how lowriding has influenced the use of adjustable suspension in other performance and luxury cars.

So, as we close out another week, get out there and see what ideas stimulate your thoughts not only in regard to your build, but the lifestyle we’ve created, and as we enter 2020, it’s also time for us to change the game up and that brings me to yet another idea which I can’t ever recall being done in our scene. It was a actually a big mod in the luxury car market back in the 80’s, and inspired by the historic GT40. While watching Top Gear, they did a flash back to the vintage race days and I couldn’t’ help but to fall back in love with the “roofed doors,” thus making it easier for race car drivers to enter and exit the cars with their helmet on.

Although we won’t be using it for the same purpose, the mod is tasteful and adds an old school element that can only be appreciated by those who know a bit about vintage vehicle design. So why would we do it? Well, it could be utilized to help enter/ exit lowriders with chopped roofs or for those like me who’re a bit taller and a little less flexible. Either way, it’s something to think about because at the end of the day we’re only as good as our latest creation.

Head over to Top Gear by clicking here to watch a few episodes and see what sparks your imagination because in the end, the one with the most mods may win, but the first one to market a new idea will always be the one.