Newsletter
Sign Up today for our FREE Newsletter and get the latest articles and news delivered right to your inbox.
Home » Gypsy Rose Becomes the First Lowrider Inducted into the HVA 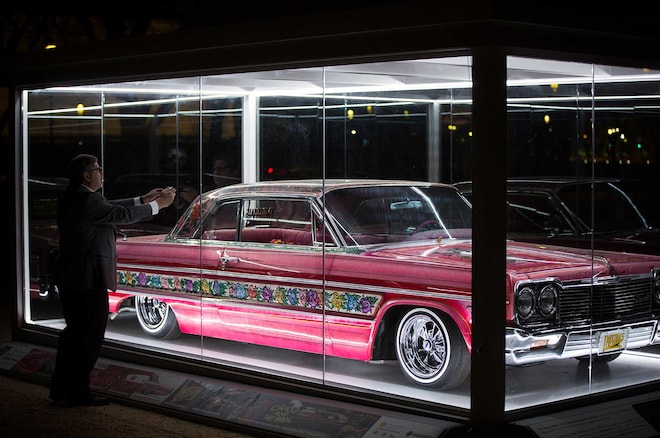 In typical fashion, the SEMA show has become an annual ritual that takes on an almost identical itinerary year after year. We get there early, set up, and for the next week we essentially walk and talk the show by day, while nights are spent at dinner meetings at an open bar or at a restaurant. But as the annual tradition comes and goes, last year’s shindig became the most memorable SEMA Show simply because of one dinner.

Both Rudy Rivas (General Manager of Lowrider) and I were privileged enough to have been invited to a dinner hosted by Quaker State Oil/Shell Lubricants. Along with a multitude of industry influencers and distinguished guests, we took a seat at this exclusive dinner engagement and got acquainted. One by one, we began discussing our roles in the industry. Sitting beside Rudy was a gentleman who introduced himself as the President of the HVA (Historic Vehicle Association). During his discussion he talked about his organization and expressed interest in having a lowrider be included in an event they called “Cars at the Capital.”

Being that the room was filled with roars of laughter, celebratory toasts, and cheers, it was a bit hard to hear him, as the ambient noise levels were harsh. In standard format, the gentleman began discussing the logistics of his program and as he talked about the location, the ceremony, and choice of cars I couldn’t help but think inside my head, “Here we go again.” You see, being in this industry you are bombarded with sales pitches and marketing gimmicks, and while I admit to being a bit jaded, the tone of my attitude changed quickly as the man began talking about cars.

Throughout the years, I’ve heard all the pitches about event logistics and potential crowds, exposure and revenue, but rarely have I heard anyone be so well versed when it comes to car culture; and this guy definitely had it. As he moved over to the subject of lowriding, he began to talk about the “Gypsy Rose” and that’s when I knew he was about his business. His talk was specific, and not in general as the many before him and let’s just say that he definitely got our attention. As the conversation grew, I peered over to his name badge, and with all table etiquette out the window I placed my phone under the table and discretely ran a Google search on his name. With bad reception, it took a bit to load but once it did the first thing that caught my eye was a slogan that said, “Join the Movement, Drive History!” From there, the next sentence caught me as it read, “The mission of the Historic Vehicle Association (HVA) is to promote the cultural and historical significance of the automobile and protect the future of our automotive past.”

Needless to say, I was sold.

This mission of his organization was to educate, preserve, and protect the future of our automotive past, and I was floored. This was something I had never known existed but something I truly admired. I constantly talk about preserving the traditional values of lowriding, but here was an organization that wasn’t as singular. Instead, what they did for lowriding they did for the entire automotive culture.

The HVA organization aims to achieve documentation and recognition of historically important vehicles in a National Historic Vehicle Register. They protect the future of our automotive past through affiliations with museums, academic institutions, educational programs, and support of legislative action, and with over 375,000 members, the HVA is the world’s largest historic vehicle owners’ organization—and this guy sitting next to us is the president.

In the slickest way possible, I put my phone down and let Rudy know that the eagle had landed. The gentleman sitting next to him was Mark Gessler, and he was the real deal. He is a big timer with a low-key persona and as talks became more serious he began to discuss the planning and implementation of his program. As I look back to that dinner, all I can say is that it was unreal. Everything he talked about became a reality in six short months; and it not only became a reality, but the biggest thing to have happened to the culture of lowriding since its inception.

As I write this, the memories of this escapade begin to flash. I can vividly recall the dinner, most of the discussion with Mark, and post discussions with Jesse Valadez Jr. about how serious this occasion was. I remember the 3-D photo shoot of the car in our studio, as well as loading it on the transport for delivery. We can never forget working along with Mark Gessler, Director of Operations Diane Parker, Historian Casey Maxon, and their incredible staff. Then there was the flight to Washington, D.C. No different than any other flight, the reality of this event became all too apparent and surreal as I checked in the hotel and began to walk down to the National Mall. It felt like a dream to see “Gypsy Rose” being driven into the jewel box, and to be honest it is something I will never forget. In fact, that was the shortest—but most powerful trip—any lowrider has ever taken.

As the night came to an end, I sat in my room in amazement. We were taking part in such an honorable event that would literally go down in history. But the reality of the event didn’t kick in until the very next day as Mark began his speech. At that point, it became quite evident this was no longer a dream. For the first time ever a lowrider was inducted into the HVA and I was taken back. This was a win for the lowrider culture and it felt incredible to be there.

We have to thank Quaker State and Mark Gessler for giving us the great opportunity to be part of this historical event. A special thanks goes out to the Historic Vehicle Association, without their vision and support none of this would have been possible. In the same breath, we would also like to thank Nancy Bruner from Quaker State & Shell Oil. Congratulations also goes out to the Jesse Valadez family and the Imperials Car Club.