Newsletter
Sign Up today for our FREE Newsletter and get the latest articles and news delivered right to your inbox.
Home » Favorite 5 at SEMA 2015 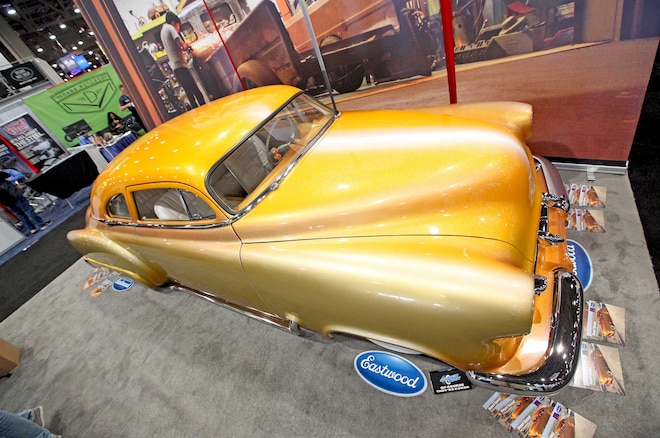 SEMA can be labeled as the Super Bowl of car shows. Everyone that’s anyone in the custom car world is here. This is the only show were you cant find a little of everything, from lowriders to hot rods, from tuner cars to muscle cars, from mini-trucks to lifted ones, and everything in between. With its vast variety of vehicles, SEMA is the perfect place to get ideas from different car cultures and implement them to ours. I compiled a list of five of my favorite rides at SEMA with a build style that can be incorporated to a lowrider build.

Dave Kindig and his crew built the Cadillac at Kindig It Designs in Salt Lake City, Utah. “We did a custom mix with PPG paint to get the effect of a candy paintjob but without the hassle of having to match the paint. We did that because this car is a driver and will take a lot of wear and tear,” Kevin Schiele, the car’s builder, says. The Cadillac has a 4-inch chop, custom-built trim, cut fenderwells with a 454 Ram Jet engine, and took roughly 13 months to build.

Gene Winfield in Mojave, California, built this 1952 Chevy for the owners of Wheels Unlimited Kustoms (a Japanese-based alloy wheel company). The Chevy’s front bumper is comprised of about five different makes and models. A 1959 Chevy dash was molded along with countless Winfield modifications. The car was finished off with a Winfield signature fade paintjob.

Mike Slosh of Arkansas is the owner and builder of this 1965 Chevy C10. Mike did all the metalwork, including Z-notching it and lifting the woodgrain bed. Two-tone green and white paint was added for a classic look but don’t let that fool you. Under the hood you will find a 6.0L motor with a Magnuson supercharger and MSD throttle body.

This one-of-a-kind Chevelle was built at Kindig It Designs in Salt Lake City, Utah. The red LS7 sits on top of an Art Morrison chassis. The front and rear bumpers have been heavily modified along with the taillights. “It’s been a great marriage between Kindig It Designs and MSD. We use a lot of their products, like their coils and throttle bodies,” Kevin Schiele, the shop foreman at Kindig It Designs, says.

This truck debuted last year with a white paintjob and platinum wheels. Laurence Garza from Houston, Texas, decided to rebuild the truck for this year’s SEMA show. He decided to copper plate everything on it, including the wheels. A black vinyl wrap finished up the truck’s new look, and only took three weeks.