Newsletter
Sign Up today for our FREE Newsletter and get the latest articles and news delivered right to your inbox.
Home » Homegrown 1957 Chevy Bel Air Convertible Conversion 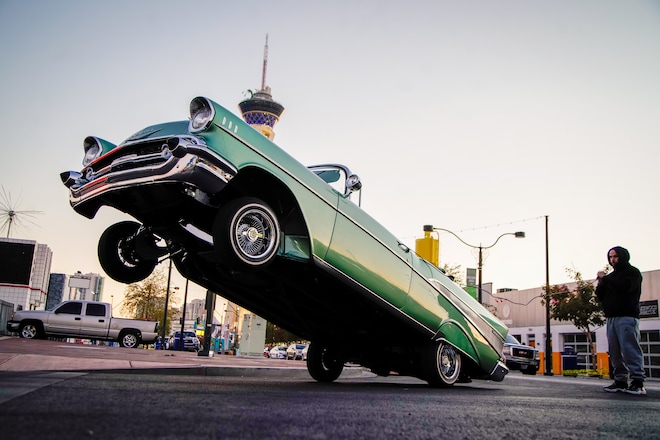 There are two types of people: Those who bide their time and wait for opportunity to arrive before making their move, and those who take a look at what they have and make things happen for themselves. Las Vegas native, Levi Elliot, is the latter of the two. When the time came for him to build his dream lowrider, he knew that finding an affordable 2-door 1957 Chevy Bel Air Convertible would be near impossible. So instead of paying the over-inflated price for this coveted car, he decided to use his skills and talent to literally convert a hard top into a drop top.

Knowing that lowrider elitists would no doubt judge and criticize his choice to chop and convert his Bel Air, Levi set out to build a clean, eye-catching ride that would shut the haters up. He began his frame-off build by chopping the hard top off and installing the convertible conversion kit with help from the crew at Nevada State Collision Center in Las Vegas where he actually works and in fact, the entire build took place there. During his build, Levi started out with a “lay and play” suspension set-up, installing a 2 pump, 8 battery Black Magic Hydraulic system.

In order to update the power and reliability under the hood, an LS swap was also brought into the picture. As for the body, Levi added fender skirts, bumper kits, and spotlights. The classic green and black upholstery came by way of Gina, at Ciadella Upholstery, and was installed by Wizards Custom Upholstery, also in Vegas. Fresh paint was certainly in order and Levi opted for a classic shade of metallic mint green.

Levi’s main goal was to simply build his dream car as a fully functional “hop and drive” affair, and that’s exactly what he achieved. That goal was achieved and proven when he was towing the finished creation to Utah from Las Vegas. On the way there, the trailer broke down and because of just how well the car had been built, he was able to pull the car off of the trailer and drive it the rest of the way without issue. For Levi, this was the best feeling ever. He set out to build a reliable, custom convertible lowrider that would show up anytime he needed it to. He closes with this, “I have more talent than I have money,” and in this case, talent has shown up.