Newsletter
Sign Up today for our FREE Newsletter and get the latest articles and news delivered right to your inbox.
Home » Art Laboe – Lowrider Original 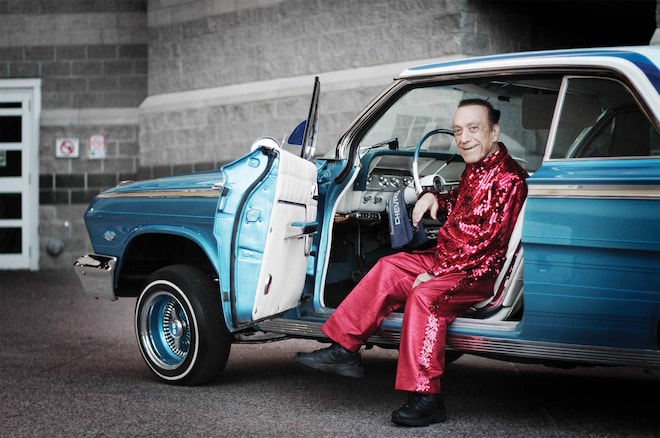 When it comes to music, it seems only fitting that the lowriding men, women, and children have a liking for those oldies but goodies. Lowriding itself, after all, has been around for decades and many of the cars we see were originally built in the ’40s, ’50s, and ’60s. These rides have been carefully restored to like-new status, ready to cruise the boulevards in the evening hours just as tradition has had it for decades. Following a similar tradition, at least three generations of lowriders from East Los Angeles have cruised the infamous Whittier Boulevard, tuning in their car stereos to hear Mr. Art Laboe over the radio.

Born in the 1920s in Salt Lake City, Utah, Art Laboe’s mother was a maid and his father a smelter. As the family took on The Great Depression of the 1930s, times definitely did become very difficult, however, it brought on an opportunity for the family to move to Los Angeles — the city that would eventually bring Art worldwide fame and would serve as his home from then to this present day.

Graduating George Washington High School at the age of 16 in the summer of 1942, Art went on to serve in the U.S. Navy during World War II, particularly as a radio officer for PanAm’s Latin American division based in Miami, Florida. Art’s service brought him great experience with the technical and commercial aspects of radio and it earned him a coveted FCC-cleared first class radio license.

Shortly after returning to Los Angeles, Art recalls stopping by the radio station, KSAN 1450 AM, looking for a job. He simply walked in and asked the receptionist for the manager. The receptionist directed Art to the manager’s office and when he walked in, the manager did not seem too interested in speaking to Art. The manager’s first question was, “Who let you in here?” Art explained he was just looking for a job and the manager basically said, “Kid, we have no job here for you unless you have an FCC-cleared first class license.” Art proudly pulled out his license and showed it to the manager. After an initial moment of disbelief, the manager offered Art a job on the spot!

It was that moment that seemed to change Art’s life forever, bringing what would become a lifelong career in radio. To this day, Art has been on commercial radio for 72 years — longer than anybody. During his on-air experience, Art has been playing just about every genre of music there is from big band and country to the first stages of R&B in the early ’50s. Although not officially inducted, Art is a part of the Rock & Roll Hall of Fame. Art was officially inducted in the Radio Hall of Fame in Chicago in 2012 and Art was one of the famous celebrities to receive a star on the Hollywood Walk of Fame near the corner of Hollywood and Highland. Art was also the first non-Hispanic recipient of the Impact Award from the National Hispanic Media Coalition.

So why is Art Laboe so popular among the lowrider crowd? Art believes it started in the mid ’50s when he did his first “Oldies But Goodies” concert at the El Monte American Legion Stadium in the East Los Angeles area. Of course the area was predominantly Latino, as is LOWRIDER Magazine’s readership, but it was Art’s ability to coordinate concert appearances of popular artists at the time. The Clovers, Big Joe Turner, and Bruce Brown were just some of the many artists who played to the concertgoers. Art also cites the old “Lovelines” section that used to be in LOWRIDER Magazine for many years (the section was for readers to make love dedications to each other) and he compares it to the popular part of his radio show where he reads dedications over air. Art says Latinos are always big on dedications!

Art’s on-air presence and his personal appearances for concerts and community events have definitely put him on the map. It wasn’t uncommon for Art to do a plethora of charity shows and give away scholarships in the Latino community in the L.A. area. Art was even the only non-Latino grand marshal for the East Los Angeles parade!

Looking back at his career thus far, Art has had so many great experiences. He has made friends with people like Dick Clark, and Les Paul, the inventor of the electric guitar. He has been able to bring the joy of music to millions of people over the radio waves and in his concerts. Even to this day, Art still coordinates numerous concerts throughout the year bringing together popular R&B singers and bands from back in the day.

His radio show, “Art Laboe Connection,” is still going strong airing over a dozen stations in the Southwest U.S. from San Diego to Las Vegas to Albuquerque. The show also broadcasts six nights a week worldwide online at KOKO94.com. Art may be about 90 years old, but as you can see, there is no slowing him down! Somehow, he is finding time to write an autobiography. The book, which will be available soon, promises to give interesting details in Art’s career voyage.

Art says he plans on continuing to do his radio show and concerts, but when that day comes where he is no longer on this earth, he says you can best believe that he’ll be throwing concerts up above with all the late artists.

Lowrider Garage Gets An E-ticket To Classics & Customs In Anaheim, Ca, AKA Lowrider Land