Newsletter
Sign Up today for our FREE Newsletter and get the latest articles and news delivered right to your inbox.
Home » A History Of ’41 to ’59 Chevrolet Pickups 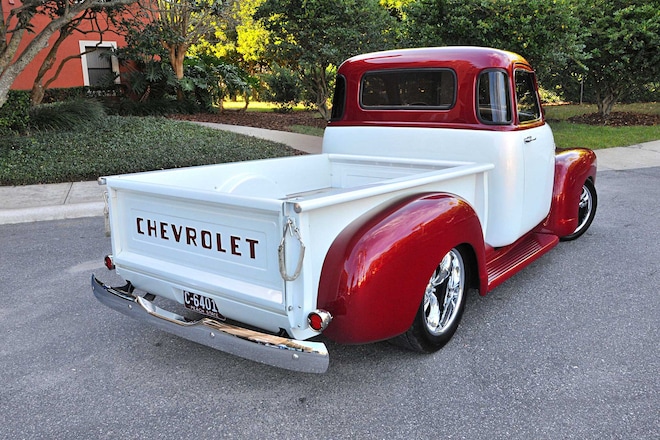 Chevrolet has a long history as a truck manufacturer that dates back to 1918. And while there were many noteworthy examples produced in the early years we’re going to concentrate on identifying pickup offerings from 1941-1959.

In 1941 Chevrolet restyled their pickups; the most notable change from the previous year was new front sheetmetal. The grille featured an upper section with horizontal bars while the lower portion had vertical bars and the headlights were now mounted on the fenders. The 1942 trucks were introduced in October 1941 with no noticeable changes. Unfortunately, like most facets of civilian life, World War II interrupted production of Chevrolet pickups and the assembly lines came to a halt in January of that year. However, Chevrolet was given permission by the government to produce trucks for “high priority” civilian use (those individuals/businesses considered to be vital to the war effort). Due to material shortages these trucks came with painted grilles, bumpers, hubcaps, and trim—the “blackout” theme continued with the resumption of civilian production in late 1945 and early 1946.

By the middle of 1946 Chevrolet once again began production of pickups with bright trim. Chevrolet touted these “new” postwar offerings as being improved by virtue of the experience gained building military vehicles during the war, however they looked identical to the 1942 models.

In 1947 Chevrolet introduced the new Advance Design series with what was called the Unisteel cab. Gone was the crank-out windshield, and the windshield wipers were now mounted on the cowl and cab quarter windows were optional. The headlights were repositioned in the fenders and the new grille had five grille bars with parking lights between the top two. While there were no vent windows in the doors, there were vents that could be opened in the top of the cowl and in the lower portion of the driver side cowl.

For 1948 Chevrolet trucks remained virtually unchanged, then in 1949 an obvious difference was the location of the gas tank. The 1947-1948 trucks had the filler for the frame-mounted gas tank on the lower right side of the pickup bed. In 1949 the tank was moved inside the cab and the filler was now behind the right door. Other than relocating the gas tank, some minor trim changes, and a few mechanical improvements there were no significant changes made for 1949 and 1950.

The most noticeable change for 1951 was the elimination of the cowl vent in front of the driver door and the addition of opening vent windows in both doors. Due to material shortages the chrome grille option that had been available previously was not available in 1951—all trucks had painted grilles.

About the only visual clue to identify 1952 and 1953 trucks was the change from rotary to push-button door handles. There were minor nameplate changes and chrome grilles were still unavailable.

Chevrolet made some noticeable alterations in their truck line for 1954. There was a new grille with a single horizontal bar with large parking lights mounted below. A curved, one-piece windshield replaced the previously used two-piece flat glass windshield with a center divider. The dashboard was redesigned, there was a revised pickup bed and round taillights were now used.

In 1955 there were two versions of Chevy’s pickups. What’s known as the First Series was basically the same as those offered the previous year; the Second Series trucks were introduced in March 1955. There were a variety of mechanical changes. Along with the new V-8 engine that was available the electrical system was now 12V and the closed driveline was eliminated.

The redesigned “Task Force” trucks for 1955 had grilles and hooded headlights similar to the recently introduced passenger cars. There was a new wraparound windshield with either the standard small rear window or what was called the panoramic wraparound rear glass. The new pickup bed had separate fenders with short running boards behind the cab and the dash was redesigned. Also new for 1955 was the Cameo that featured a bed with smooth side panels and unique taillights.

Other than some changes in badging, 1956 pickups, including the Cameo, remained unchanged. In 1957 a revised pickup grille was introduced that also appeared on the limited-production Cameo along with new trim on the bed.

Chevrolet revamped their pickups for 1958 with dual headlights; a new grille with integral parking lights. Light-duty trucks wore Apache fender badges (Viking was the designation for medium-duty trucks, Spartan for the heavy-duty versions). Along with the standard Stepside bed with running boards and external fenders, there was a new Fleetside option with smooth sides. Cameos received the revised front sheetmetal, however the bed remained the same as found on the 1957s. Other than larger nameplates on the front fenders there were no significant changes for 1959.

The popularity of Chevrolet trucks is undeniable as sales records indicate that more than 7 million were sold from 1918 through the 1959 model year. Thanks to the number of Chevrolet trucks that have been produced, good examples can still be found. And thanks to a long list of Classic Trucks advertisers, all the parts needed to make them better than new are readily available.

From 1941-1959 Chevrolet pickups continued to evolve. In some years differences were easy to spot; in other years, not so much. The most accurate means of identification is the id plate on the left front body hinge pillar.

This is typical of 1942-1946 pickups. Note the wipers are above the windshield to accommodate the crank-out windshield that was hinged at the top.

Chevrolet introduced their stylish new truck in 1947. With some minor exceptions it remained essentially the same through 1953.

A new grille made the 1954 and First Series 1955 trucks easily recognizable.

Second Series 1955 Chevy pickups were completely redesigned and included styling cues similar to those found on the all-new passenger cars, including the egg-crate grille. There were only minor trim changes for 1956.

For 1957 Chevrolet redesigned the grille, but little else changed.

In 1958 Chevrolet followed the new trend toward quad headlamps. This example is a 1959; the only visual clue is the difference is in the hood emblem. The 1958 emblem is thinner with the wide portion on the bottom.

Although this truck has been shaved of its door handles, Chevy trucks did not have vent windows through 1950.

Beginning in 1951 vent windows appeared in the doors.

In 1949 the fuel filler was moved to the right side of the cab; in 1952 push-button door handles were introduced with the cylinder in the button.

Taillights through 1953 were the classic rectangular design.

From 1954 on the Stepside pickups used round taillights.

Fleetside beds also used round taillights as well as a unique tailgate.

The limited-production Cameo pickups were produced from 1955-1958. The fiberglass sides were attached to standard pickup boxes.

Rotary door handles were used through 1951 with separate locks in the passenger door only. It’s said this was done to discourage exiting into traffic (which some say was illegal in some states), others say it was simply a cost-cutting move.

From 1954 on the bed rails were flat. Note the optional cab corner windows.

In 1958 Chevrolet introduced the smooth side Fleetside bed

From 1941-1946 the instrument clusters were rectangular. Note the handle visible behind the steering wheel in the center of the dash—it was used to crank the windshield open for ventilation. (This original example is a new project belonging to contributor Chuck Vranas.)

In 1947 the dashboard was changed to include two large instrument pods.

For 1954 the dashboard was changed again. While two gauge pods were still featured the dash was shaped differently to accommodate the curved windshield and the radio speaker grille now had vertical slots.

For the Second Series 1955 trucks the new cab also feature a more car-like instrument cluster. The dash design continued through 1959.

From the Second Series 1955 trucks through 1959 the fuel filler was located on the driver side.

In 1958 and 1959 light-duty pickups were identified with Chevrolet Apache insignias on the fenders with the 31 denoted the series.