Newsletter
Sign Up today for our FREE Newsletter and get the latest articles and news delivered right to your inbox.
Home » 2016 Nissan Maxima 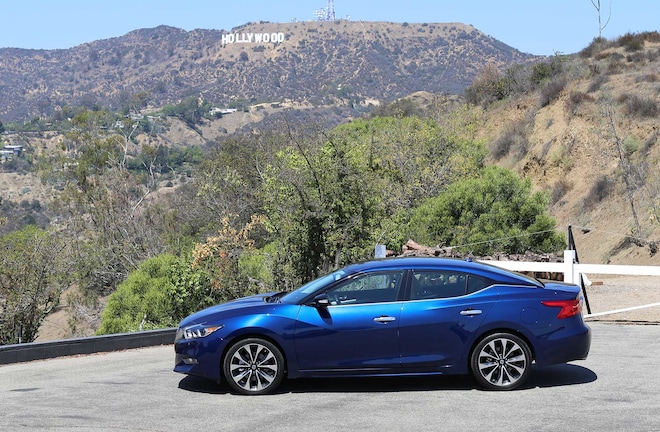 When it comes to sedans, there is no denying that we – as the Latino market – love the Nissan brand. From the Altima to the Maxima, these sedans have become a part our automotive make up.

Since the 1st generation Nissan Maxima’s were introduced back in 1980, the bloodline of this magnificent brand has been what dreams are made of. But ask any Maxima enthusiast and they’ll be sure to agree that some of it’s luster was tarnished from the 5th to the 7th generation – but not now. For 2016, the engineers at Nissan have reclaimed their glory and introduced a newly redesigned Maxima that’s worthy of its namesake and heritage.

With fresh new lines and a striking presence, the new Maxima is a sports sedan with a bold persona. Its sleek styling and free flowing lines, provide a dramatic visual escapade that truly lets onlookers enjoy the design. Whereas most new sedans are void of contour lines, the Maxima’s design proves to be aggressive and sleek. The scalloped doors, and aggressive front fascia give this family sedan an ominous presence, and the integrated LED running lamps are sure to make you do a double take.

Powered by a newly redesigned 3.5-liter, 24 valve, V6, the new 300 hp motor provides more than enough salsa to get you in an out of traffic. With 261 lb.-ft of torque, more than 60 percent of the engine boasts newly designed parts, and flaunts a new intake manifold and valve train which help the motor breathe thus increasing overall hp and torque. For seamless and smooth shifting, the V6 is mated to a new Xtronic CVT (Continuously Variable Transmission).

While in CVT mode, occupants of the vehicle will experience linear acceleration void of the “jerk” between gearshifts but during hard driving Nissan’s “D-Step Programming” will create the sensation of shifting gears. In addition to a wider gear ratio and adaptive shift controller, the transmission not only provides a more connected and spiritual driving experience, but a pavement pounding thrust that also helps increased fuel economy.

The interior of the new Maxima left us speechless. For a mid priced sedan that doesn’t fall into the “luxury” category, the guts of the Nissan Maxima come from rich bloodlines. In it’s simplest form, the interior of our test car was stunning. At first glance, most everyone that got to experience the car thought that the interior had been customized and reupholstered when in fact it was stock. The attention to detail on the interior was beyond impressive. From the knurled buttons, to the split diamond stitching, the interior of the Maxima was much more impressive then it’s German counterparts which are double the price.

Many who sat in the car mentioned that it felt like the cockpit of a luxury jet fighter, and that’s exactly the inspiration of their design. Nissan mentioned that it’s designers spent time studying the U.S. Navy Blue Angels F/A 18 Hornets, and much of what you experience was inspired by the cockpit of those legendary aircrafts. That said, little subtleties like a 7-degree angle of tilt on the dashboard, intertwines the driver with all the necessary instrumentation.

While fighter jets may have inspired the interior, the suspension of the all new Maxima was inspired by it’s bigger brother – and infamous street fighter – the GTR. With multiple modes, we drove it mainly on “Sport Mode” and the responsiveness of the throttle becomes sharper, steering gets heavier and shifts get quicker. In short, the best way we could describe “Normal Mode” vs. “Sport Mode” is much like the difference between a sprinkle of Tapatio vs a few drops of Habanero.

The new suspension is 1.3 inches lower and 2.2 inches longer than previous models thus making it an able bodied sedan than can handle a cool canyon run. In addition, the use of high strength 1.2 GPa steels improves torsional rigidity while providing a reduction in weight of 82-pounds, thus giving it a better power-to-weight ratio than a BMW 335i or Acura TLX V6.

With enough trunk space to fit at least four large coolers, 20 pounds of carne asada and just about everything else you’d need for a fiesta, it’s more than ample and capable. Again, the Nissan Maxima may be considered a sports sedan but it’s functionality makes it much more than that.

Back in the 80’s stereo shops were all the rage because of inadequate car stereos, but the optional Bose sound system in our test model is proof that it’s only getting better. With clear front staging, and crisp audio reproduction, there’s nothing more we’d want out of a system.