Newsletter
Sign Up today for our FREE Newsletter and get the latest articles and news delivered right to your inbox.
Home » 2014 Chevrolet Impala – Generation X 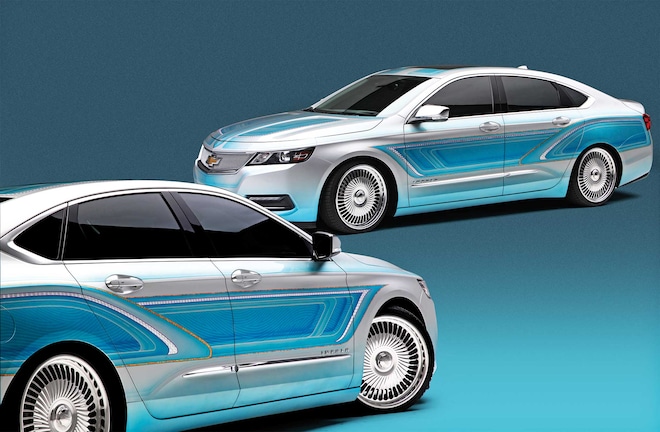 In 1956, Chevrolet toyed with the idea of making a two-row Corvette after learning of Ford’s plan to enlarge the 1958 Thunderbird by including four seats. That same year, Chevrolet introduced the 1956 Chevrolet Impala concept at the GM Motorama show. The 1956 Impala had Corvette-like front and rear ends and design elements that would later be used on Impalas like the C-pillar that showed up in the 1958 Impala.

Chevrolet ended up abandoning the two-row Corvette and introduced the Impala in 1958 as a top-of-the-line Bel Air. The Impala would go on to be one of Chevrolet’s most historic vehicles. The 1959 Impala broke away from the Bel Air with a radical redesign that is still considered to be one of the most distinct-looking cars in American history. The brand’s most defining year was the 1961 model as it introduced the Super Sport model and 409 engine, making it one of the first true American muscle cars.

The fifth generation began in 1971 and it was the biggest Chevy ever made. The ’76 model was the last year of the fifth generation and the end of the large sedan. Chevy discontinued the Impala from 1986 to 1993. Eventually, Chevy brought back the Impala and for the first time made a four-door Super Sport.

After the 1996 Impala, Chevy discontinued the Impala once again to bring it back in 2000 and for the first time didn’t offer a V-8 option. For its 10th generation, Chevy decided the Impala should have cutting-edge technology and new fresh styling. The 2014 Impala took slight cues from the Malibu and Camaro. Body lines reminiscent of mid-1960’s Impalas were added to the rear fenders. With the new slick design, Chevrolet hopes to eliminate the boring look the last two generations Impalas had.

Body/Paint: Philip’s Fine Lines used silver metallic base and Axalta Paint Products to lay candies, pearls, and fades. Philip’s Fine Lines then added blue and lavender striping before finishing it with gold leafing. The exterior was finished with an E&G Classics mesh grille.

Suspension: Lowered by the Engle Brothers

Sound: Chevrolet MyLink radio with an 8-inch touchscreen and 11 Bose speakers for a surround-sound feel