Newsletter
Sign Up today for our FREE Newsletter and get the latest articles and news delivered right to your inbox.
Home » 2013 Harley-Davidson Road Glide – Gliding in Paradise 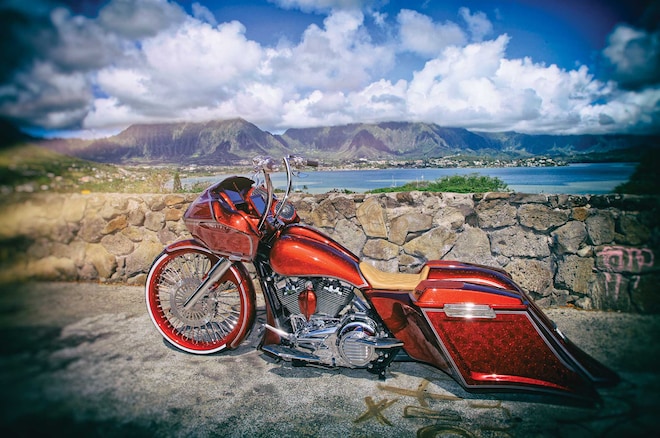 Matthew Pasion of Waipahu, Hawaii, has always been into custom cars and bikes since high school. “The need to stand apart from the rest is why I always customize my rides whether it was a mini-truck, car, or bike.” His need for customizing landed him a feature in our August 2013 issue with his Deluxe. “I wanted to see if I could do it again with a different platform.”

Matt had mentioned to Jay Soares of 66 Rides that he wanted to put saddlebags on his Deluxe. Jay replied with, “Buy yourself a real bagger.” So his journey to purchase one began. “I purchased this Road Glide new in 2013, on my girl’s birthday. Kind of like, “Happy birthday, look what I bought myself.”

His desire to standout from the crowd meant that he wasn’t going to order parts from a catalog or online. Instead he made sure that every part of his bike was chopped, cut, raked, channeled, contoured, or redesigned altogether. Matt custom built the fairing and stretched the saddlebags, side covers, and rear fenders. Custom fiberglassing came easy to him, as he had learned from Chad Parades a well-known audio fabricator in Hawaii.

Jay Soares of 66 Rides did all the mechanical and engine work as well as the 26-inch wheel conversion. Jay cut the neck and raked to accept the large front wheel as well as internally running the wires, brake lines, and clutch lines. “The hardest part of the build was changing my mind a million times with all the fiberglass fabrication.” Once he felt it was perfect, he sent it out to Scott Beans who laid out the multi-based candy red with a ton of flake.

Matt, Jay, and Scott were able to complete the Road Glide in six months, just in time for the first annual Hawaii Motorcycle Rally. “I was literally putting on the last screws at the show. Thanks to the efforts of Scott Benas, Jay Soares, and the 66 Rides fam for making this possible and to my girl Marissa who put up with all the madness.”

Sound System: iPad minis were used as gauges and another to control the Rockford Fosgate amps and speakers