Newsletter
Sign Up today for our FREE Newsletter and get the latest articles and news delivered right to your inbox.
Home » 2012 Harley-Davidson Road King – Childhood Hero 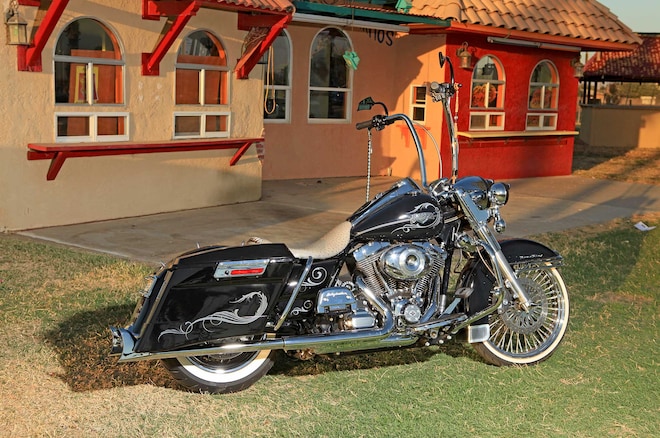 Pedro Infante is without a doubt one of Mexico’s most legendary actors. As a kid, Eddie Cano can remember how much his dad loved to watch his movies. One in particular, A Toda Maquina, featured Pedro as a motorcycle cop riding a huge Harley. In fact, a statue of this famous role can be seen in Mazatlan where Infante was born. From then on, Eddie knew he’d have to get himself a big ol’ hog one day.

That day came on his 40th birthday thanks to his wife Mayra buying him a brand-new 2012 Road King Classic, which was Eddie’s very first Harley. From there, Eddie got started making the necessary changes to modify it to his tastes and personality. For power, the Road King still sports its factory 103ci motor and six-speed tranny. Thirty-inch fishtails have been added to the exhaust as part of the overall lowrider look. Its also been upgraded with 21-inch Sinister wheels and Avon tires.

On the body, Mutazu fiberglass stretch bags were added and upholstered with ostrich skin on the inside to match the seat done by Ramon at Manaco Upholstery in Bakersfield, Caliornia. The stock paint was adorned with pinstriping by Bobby Negrete along with muraling by Jay Werner, both of Bakersfield, California. The audio system was upgraded with a custom iPod holder, an Alpine amp, four Alpine 6x9s, and a Clarion EQ.

Although Eddie wants to add some gold and silver leafing, he considers “El Chaka” pretty much a done deal. Special thanks goes out to his wife, and his club Aztec Image. Although his life was cut short, we’re sure Pedro is smiling down with glee knowing that his ’50s Harley-riding character has inspired people to become fellow riders.

Body/Paint: Stock black with muraling by Jay Werner and pinstriping by Bobby Negrete