Newsletter
Sign Up today for our FREE Newsletter and get the latest articles and news delivered right to your inbox.
Home » A 2008 Cadillac Escalade EXT on Diablo Wheels 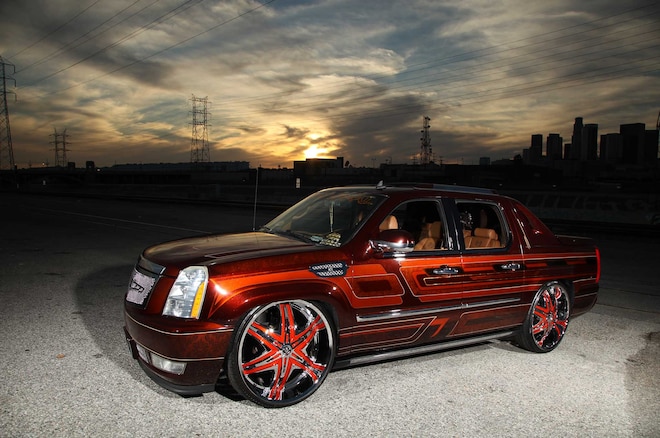 Miguel Cazares of Santa Clarita, California, attended car shows with his brother when he was a kid. He knew back then that one day he would build a show vehicle of his own. He purchased this Escalade from Felix in Downtown L.A. with the original intention being to use it to haul another truck he was working on. As time went by, he changed his mind and began working on this one instead.

The first thing he did was purchase 28-inch wheels for it. The real transformation started when he sent it off to Rapture Auto Body in Santa Clarita, California. Roy Martinez added the House of Kolor root beer brown and an aftermarket grille. He was then going to lower it but ended up deciding on bagging it instead. Junior at Audio Factory in La Puente, California, installed the air ride setup.

“After a year, I began to feel like the truck was missing something,” Miguel says. The truck went back in to Rapture Auto Body and received multiple patterns and then some striping and leafing from Rich Conejo of Sylmar, California. The old grille was taken off and a new five-piece set of Tiarra double-mesh grilles was installed. Albert at 909 Motoring sold Miguel a new set of 28-inch Diablo Elite wheels.

After it came out of the shop with a new look, Miguel decided to do some work to the 6.2L engine. He painted the cover to match and then added a K&N intake and a redtop Optima battery with an engraved battery cover by Tommy Castanera. The final stop was with Joe of California Upholstery in Bell Gardens, California. Joe did the seat in perforated leather peanut butter brown, chocolate suede, with the Cadillac logo stitched into the seats. The trunk build is a never-ending story, so you are sure to see more upgrades later.