Newsletter
Sign Up today for our FREE Newsletter and get the latest articles and news delivered right to your inbox.
Home » 2007 Chevrolet Avalanche – Japanese Gold 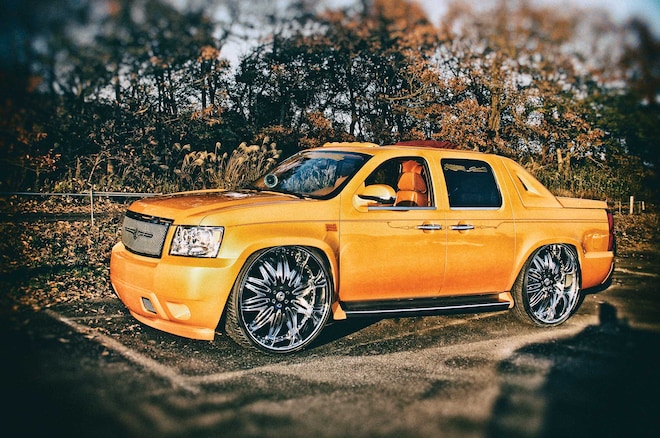 Since his first ride, Dai Nunokawa of Japan has been into lowriders. “When I first started building rides I used to import LOWRIDER Magazine and it was my only source of instructional material to build cars. There weren’t any other means of getting information like there is today, so I truly appreciate the opportunity to be featured in the magazine as I’ve had respect for a very long period of time.”

Through the years, Dai has built multiple cars, but once he reached his 30s he wanted to build something that he could enjoy with his family. He decided on a 2007 Chevrolet Avalanche. He took it to KTC in Ibaraki, Japan, where they added multiple modifications, such as removing the door pillars, adding suicide rear doors, and moving the rear door handles to the front, adding a wide body, rag top, and extending the bumpers.

Hammar Design then sprayed a House of Kolor sunrise pearl base with candy gold before adding pinstriping and gold leafing. With the body and paint completed, the Avalanche head over to 666666 (Six by Six) in Gunma, Japan, to get a custom interior and a massive sound system by Claire in Niigata, Japan. Seek in Ibaraki, Japan, installed four Viair 408Cs to tuck the 32-inch Asanti wheels.

“I just hope that my vision for the truck is well received by the many readers and fans of your magazine and in hopes of being able to send a slight message that Japan is going strong, even after going though some rough times.”

Body/Paint: Some of the body modifications include suicide doors, wide body, pillarless, extended bumpers and slinging rag by KTC in Ibaraki, Japan. Hammar Design at KTC used House of Kolor sunrise pearl base and candy gold before adding gold leaf, pinstriping, and a mural.