Newsletter
Sign Up today for our FREE Newsletter and get the latest articles and news delivered right to your inbox.
Home » 2005 Chevrolet Monte Carlo – Marine’s Monte Carlo 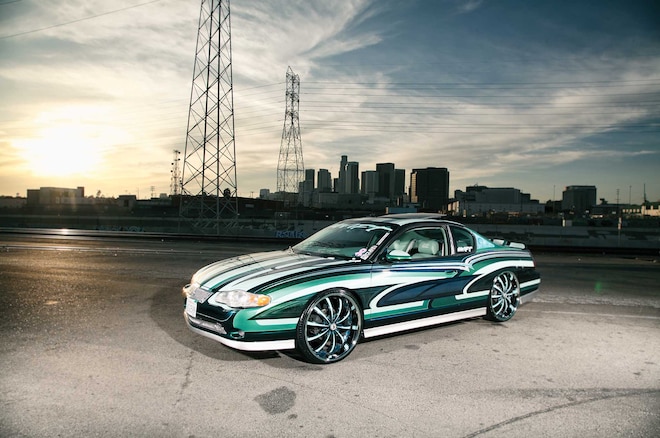 Harry Tapia of Cudahy, California, is a machinist and a Marine veteran who’s always had a passion for custom cars. As he grew older, so did his passion.

Harry purchased this ’05 Chevy Monte Carlo in 2007. “I bought it from a dealer in Bell, California, with the intention of building it into my show car. It was red with a stock supercharger and the first thing I did was slap on some 24-inch wheels.” At the time, he was an active Marine and didn’t have time to fully build the car, as he would train and deploy to Iraq.

In 2011 Platium Auto Body in Bell added a chameleon paintjob and Rick at LA Kustomz installed a ViAir airbag setup. Even though he knew that he was still far from completing his build, Harry decided to look around for a car club to join. “I knew that Swift was the best and that I still needed to do a lot in order to join.”

Harry took his Monte to Elio of Mobile Tech Audio once he began prospecting for Swift to have his Alpine double-din deck, multiple TVs, Alpine mids, and JL Audio W7 subwoofer installed. Joe at California Upholstery in Bell Gardens, California, stitched a two-tone interior by using a Mint Green vinyl with Forest Green vinyl inserts. With interior complete, he was able to become a full-fledged Swift member.

“I didn’t want to be a basic car in the club, I wanted to leave my mark and win trophies. So I kept working on my car.” He added fiberglass throughout the car’s interior and trunk by MCA Customs and Mobile Tech Audio. “That’s when I called Skippy to lay patterns and striping on the whole car.” Castaneda added engraving, while Speedy’s Polishing added the chrome. Harry isn’t finished with the car, as he has more plans for it.