Newsletter
Sign Up today for our FREE Newsletter and get the latest articles and news delivered right to your inbox.
Home » 2001 Harley-Davidson Road King – Old Habits Die Hard 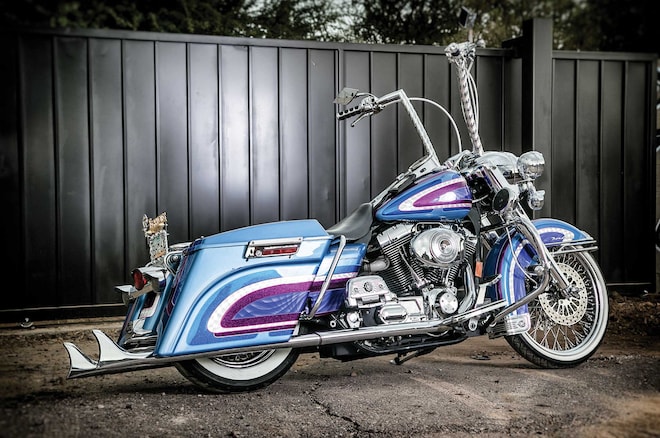 We all have our bad habits or “malvicios,” as some would call them. No matter how big or small, we all have something that can become a borderline obsession. For some it’s collecting LOWRIDER Magazines, while others fixate over owning every possible NOS accessory ever made for their vehicle. For Ruben Salazar, his obsession involves the open road and a customized Harley-Davidson constructed of good old-fashioned American iron.

After owning several Harleys, Ruben’s childhood fascination would eventually lead him to building this full custom 2001 Road King, aptly named “Malvicio.” No stranger to customizing, he began his latest creation with a visit to Cisco Customs, who would prep and spray the various candy pearl combinations with Alex of Modern Art adding line after line of accenting colors and silver leafing, giving this bike its signature look.

With a pair of 21-inch and 18-inch chrome 80-spoke wire wheels mounted onto Metzeler whitewall tires, Locote Style Custom would then install a custom Platinum air ride system. With the heart and soul of this build chromed and polished by Metro Plating in Mesa, Arizona, the 2001 HD 95 big-bore with a five-speed transmission was then fitted with Buky Bar pipes as well twisted custom handle bars and a complete Kenwood audio system.

We all know bad habits are hard to break and Ruben has no plans on even trying. But he did want to thank his wife, Angie, for putting up with his vice. He also thanks everyone else that helped in creating this rolling masterpiece, especially the crew at Locote Style Customs.