Newsletter
Sign Up today for our FREE Newsletter and get the latest articles and news delivered right to your inbox.
Home » 2001 Harley-Davidson Road King – Mando’s Road King 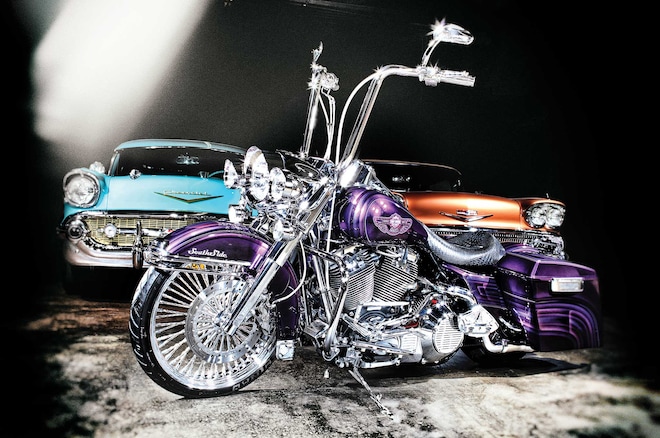 Big Mando from SouthSide CC found this 2001 Harley-Davidson Road King on Craigslist about a year ago. This isn’t his first Harley, Big Mando has been riding ever since his club started up. Big Mando, the president and founder of SouthSide Car Club, has been running the club since its start in 1994. “I’ve been riding Harleys since before the club started and since we started the club we’ve had Harleys in our lineup.”

Big Mando’s lowriding roots can be traced back to the early ’80s. “SouthSide Harley-Davidson is not a club or anything like that. Me and a few of the guys just got a few jackets done, but its still part of SouthSide Car Club.”

After installing a cam, Big Mando added diamond-cut to the motor, loaded it with Performance Machine accessories, 18-inch ape hangers, and an alligator seat. The all pearl paintjob was done at SouthSide Customs USA and Willie Olea did all the patterns and fades, while Curly’s Pinstriping in Paramount, California, added the striping.

Mando would like to thank all the guys for always supporting him.