Newsletter
Sign Up today for our FREE Newsletter and get the latest articles and news delivered right to your inbox.
Home » 2000 Aztlan Bike – Two-Wheeled Dragon 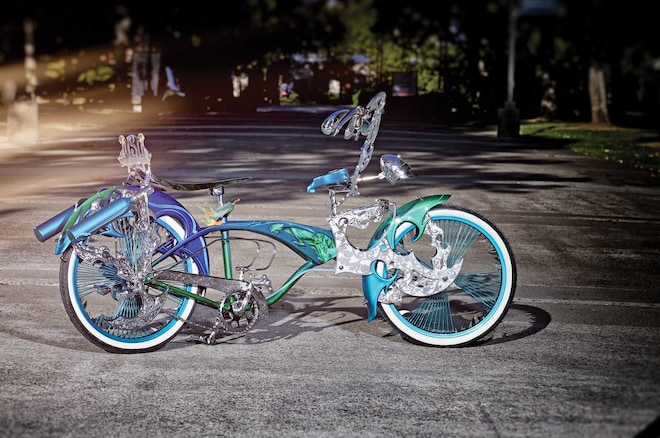 The desire to build a lowrider bicycle came after Moses Espinoza attended his first car show. Moses asked his dad to build him one and he complied. “When we started building the bike we were buying all twisted parts and chroming them. We soon realized that we would never be competitors in the lowrider bike scene this way, so we tore it down and began fully customizing everything.”

The first step in the rebuild was to come up with a theme. Moses likes dragons so they decided to go with a dragon theme. “It was a challenge to come up with custom parts that didn’t look like everyone else’s.” His dad began building the custom parts; once it was ready, they took it to Gilbert Acosta for a three-tone candy fade paintjob. Alex of 408 Customs added fire-breathing dragon murals to both sides of the bike. Carlos Lema added blue and green striping to complement the paint. Miguel Chavez took care of engraving all the chrome parts. When the bike was finally complete, they decided to debut it at the Lowrider Super Show in Las Vegas as a member of USO’s San Jose Chapter. “We went up against the best in the country and took first place for 20-inch mild, that’s something I’ll never forget.”

To some, Cadillacs are considered an old folks car, but to people like Daniel Orosco they make the perfect candidate for a luxury lowrider.