Newsletter
Sign Up today for our FREE Newsletter and get the latest articles and news delivered right to your inbox.
Home » 1999 Lincoln Town Car – Str8 Payasiando 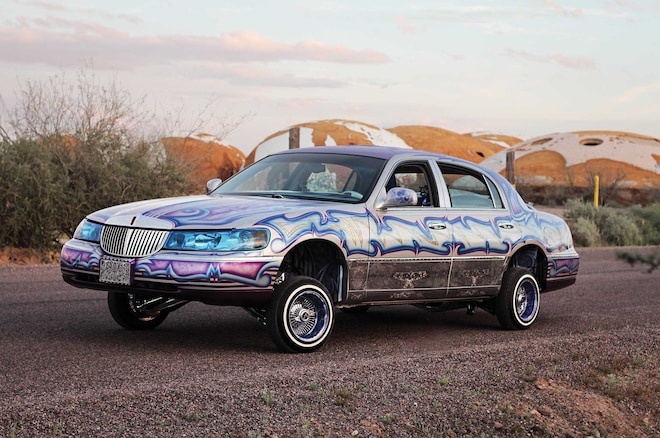 Alfonso started lowriding at the young age of 8 with his neighborhood buddy, Jose Pena, from Touch of Class Car Club in Southern California. Alfonso would help him out, working on Jose’s ’90 Lincoln Town Car and, in return, Jose would take Alfonso to the car shows. Jose’s positive influence made a lifelong impression on Alfonso and the lowriding lifestyle stayed with him from adolescence through adulthood.

Alfonso recalls his first official ride was the lowriding bicycle his mom gave him as a gift. He started taking it to the car shows with Jose and that’s when he started to realize that he wanted to do more, and with that came the need for money. As soon as Alfonso was old enough to work, he started to paint houses. With each dollar he earned, he would set some cash aside for a car. By the time he hit 17 years of age, Alfonso had enough money for a good down payment. That Saturday following his birthday, Alfonso’s father signed the papers for his son’s first car, a gray 1999 Lincoln Town Car. Alfonso soon added his first set of 100-spoke chrome rims, Black Magic single-pump hydraulic setup, and a set of pinstripes on the outside.

A couple years later, Alfonso met Mike Gomez from Kolor Me Krazy, and had this talented automotive painter do up a custom paintjob on the Lincoln. When Alfonso moved with his family from California to Arizona, he ended up meeting a member of the Avondale chapter of Majectics Car Club. From there, Alfonso not only joined the club, but he was also introduced to some custom builders from the area. With one customization after another on his Town Car with the utmost attention and care, soon things were picking up the pace. The ride, now famously known as “Str8 Payasiando,” basically means that this Lincoln is “straight clowning” on the competition!

Alfonso gives big thanks to his wife, Yvette, for all her support, and to his friends and acquaintances whom helped build this super-custom ride.

Body/Paint: Kolor Me Krazy did the bodywork and custom silver paintjob with purple patterns. LG Pinstriping tackled the striping and Rick of Voodoo Works did the airbrushed murals found in and outside the vehicle. Swing Engraving in Phoenix added the elegant touches.