Newsletter
Sign Up today for our FREE Newsletter and get the latest articles and news delivered right to your inbox.
Home » 1996 Chevrolet S-10 – Gumby’s S-10 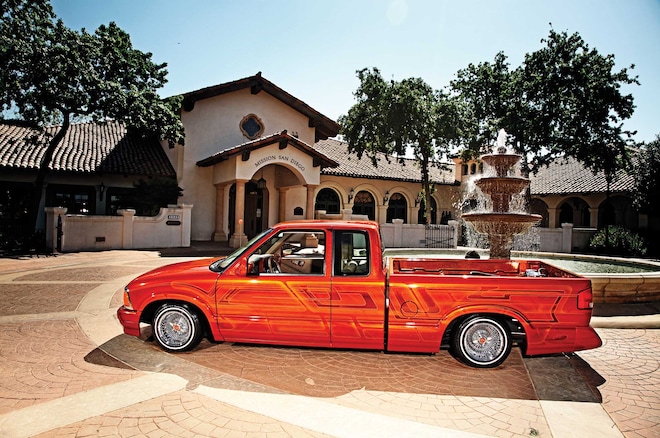 In 1993, Jose Gomez of Visalia, California, began working at a stereo shop. It was at that shop where he began to really get involved with custom cars. Jose had a 1996 Chevy S-10 that he found in the outskirts of Goshen, California. “It belonged to an irrigator who used the truck at his ranch. I was able to purchase the truck for $900 to use as a daily commuter.”

During that time, Jose’s boss had a 1963 lowrider and that inspired him to add 13-inch wire wheels to it. “While at a local parade, I saw a Mazda with 13s, candy paint, and hydraulics. That truck belonged to local car club and it helped me envision my S-10 as a lowrider.”

After talking to fellow club member Anthony De Leon, Jose decided that his truck had a lot of potential. Anthony pointed him in the right direction, as he knew a lot of people in the car scene.

The truck was taken to have the handles shaved and the bodywork done. It then went to receive a House of Kolor candy paintjob with patterns, striping, and murals. His club member Gabino Saucedo then installed the sound system and hydraulics. “Other than a few delays, the build went good and I was able to meet so many people. Winning first place at a lowrider car show made it all worth it to me and if I could go back, the only thing I would do differently is to work on a classic instead.”

Jose would like to thank Joe Morales of Joe’s Auto Works in Tulare, California, Jaime Delgado from Hampton’s Paint & Body, his car club, and his family for all their support.

Body/Paint: Shaved door handles and tailgate. Classic’s Paint and Body in Lindsay, CA, took care of the bodywork, while Rene’s Custom Paint used House of Kolor orange base and pagan gold over it. Chava Garcia of Woodlake, CA, striped the Chevy while Alberto Herrera of Visalia, CA, added all the airbrushing.