Newsletter
Sign Up today for our FREE Newsletter and get the latest articles and news delivered right to your inbox.
Home » 2X the Fun 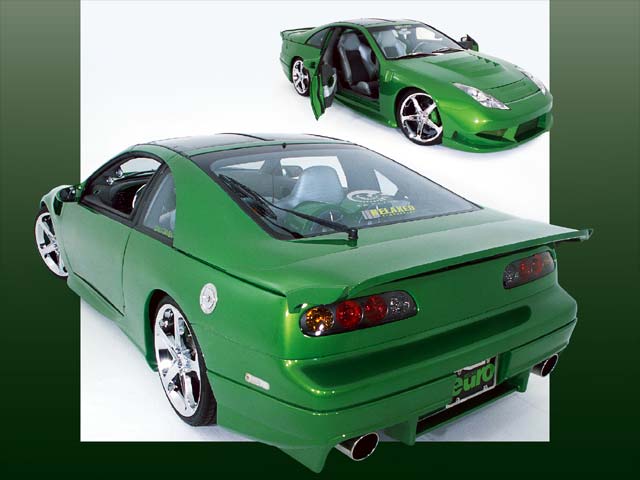 You’d never expect the sleepy town of Greenville, South Carolina, to be the place to find hot Euros, but Jon Fulmer would disagree. For the past few years, Jon and his wife, Allison, have been building killer customs and turning heads. In the case of Jon, it was this smoking hot ’90 Nissan 300ZX. The Nissan is a great foundation for any clean Euro, and Jon had a plan. He went nuts on the car, winning Best Paint awards all over the place. It was also featured a little over a year ago in a feature with his wife’s Accord, as well as in one of our “Road Trippin’ ” articles. Back then, the car was purple, had stock headlights and was cool, but not quite what it is today. Then one day, Jon decided to tear it all apart and start over. A little over a year later out it came, looking as you see it here.

Jon’s a busy guy. He runs a skating rink in town, works seven days a week, usually late at night, and is married with a child. With a schedule like that you’d wonder how he gets the time to do all of this work! The short answer is, he doesn’t. Jon does what he can when he can, but some of the work he farms out to his trusted body shop, Sculpture Works in Anderson, South Carolina. This time around everything went crazy. The body kit was molded in, cut up and reshaped from various other parts, and pretty much everything was shaved, Frenched or smoothed out. Looking under the hood, it’s no surprise that chrome and paint make everything glisten. All in all, the car is a true show winner and is taking more trophies than it did in its previous incarnation.

Jon’s a busy guy, and he’s still got more in the works. Rumor has it he’s even got a mini-truck kickin’ it in his backyard. Busy, busy, busy. Jon would like to thank his sponsors Axis wheels, Redline Racing, Impact Parts, Injen, Aerogear, Versus Motorsports, Foothills Automotive, Addi’s Upholstery, Sculpture Works, and everyone in his club, Relaxed Atmosphere.

Paint & Body Mods: Suicide doors, shaved handles, squirters, antenna, stock taillights, body lines and turn signals, Aerogear Honda Accord hood, cut and reshaped to fit, and an Aerogear ’96-’98 Honda Civic front bumper, re-fiberglassed to fit. A series of Veilside parts were imported directly from Japan, and they include the side skirts, which were molded to the car, rear bumper, plus drag wing and side view mirrors. A Sparkco gas lid, Frenched antenna, Pontiac Trans-Am vents in the fenders, Bomex front garnish, Toyota Supra taillights and 2000 Toyota Celica headlights round out the body mods. The entire car was repainted House of Kolor Limetime green pearl.