Newsletter
Sign Up today for our FREE Newsletter and get the latest articles and news delivered right to your inbox.
Home » 1989 Chevrolet Silverado – Swift 28 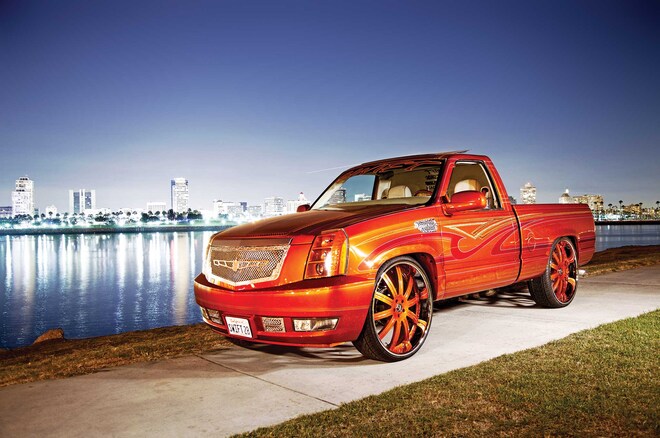 After graduating high school, Emmanuel Ramos, of Paramount, California, purchased this ’89 Chevy Silverado.”I bought it from a friend in Compton who just had it sitting there because I needed some type of transportation,” Ramos says. “Since it was my first car, I wanted to customize it a little.” He ended up painting the truck tangerine, customizing the interior, and adding 24-inch wheels. He then began seeing Swift Car Club on social media and videos of them on YouTube. The club caught his attention and he approached them to see what the requirements were to join them. With an already-customized truck, it didn’t take long for him to become a full-fledged member. Having a truck that meets Swift club standards wasn’t enough for Ramos. He wanted to take it to the next level but knew it would take time to get there.

His next move was to have MCA Customs in Bell Gardens, California, fiberglass the bed of the truck and install a massive sound system. They installed a Kenwood double deck, Hifonic amps, Alpine mids, Kicker subwoofers, and molded several TVs. California Upholstery in Bell Gardens, California, wrapped the bucket seats in beige leather with orange piping. The interior was accented with engraved Plexiglas by Speedy’s Polishing in Long Beach, California. Ramos then had the frame candy painted to match the truck and sent off the rest of his undercarriageto Mendoza Polishing in Santa Fe Spring, California, to have it dipped in chrome. A year later, the truck went into Capitol Auto Collision in Long Beach where they installed an ’11 Cadillac Escalade front clip, shaved thedoor handles/tailgate, added the sunroof, and mid ’90s Cadillac taillights. Ricardo Gomez then sprayed the House of Kolor candy tangerine. Skippy Custom Paint in Paramount, California, added the patterns and stripping. Ramos has been working on the truck since joining Swift in 2009 and finally finished it in July of 2015.

Ramos is happy with the way the build came out, but taking Third Place for Best of Show at a major show put him through the top. He is planning to leave the truck as is and making time for his next project, a ’73 C10.