Newsletter
Sign Up today for our FREE Newsletter and get the latest articles and news delivered right to your inbox.
Home » 1986 Buick Regal – Egyptian Lover 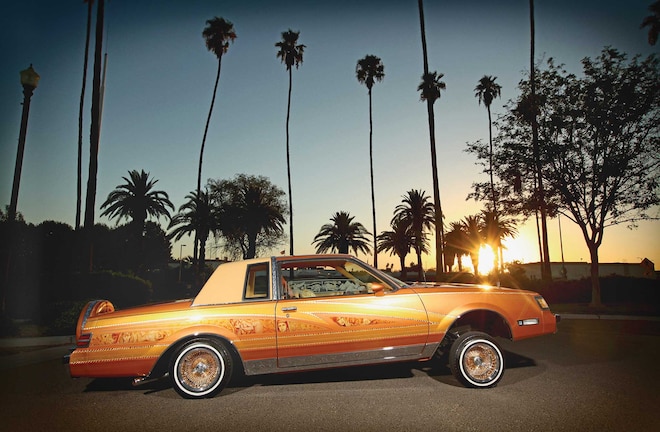 Jesus “Chuy” Villegas used to take his younger brother Rick to cruise Mooney Boulevard in Visalia, California, and local car shows when they were younger. It didn’t take long for them to fall in love with the lowrider culture and get their own lowriders. They dreamed of building a car worthy of being featured in pages of LOWRIDER Magazine.

“When I found out I was going to be a father, I decided to take a break from lowriding to focus on my family. My brother kept lowriding and he was able to make his dream come true.” His brother Rick Villegas’ 1994 Cadillac Fleetwood was featured in the February 2011 issue of LOWRIDER Magazine. “I remember him telling me that it would be nice if I could get a feature in the magazine also. When he told me that, I thought it was an impossible goal.” With the support of his wife Molly, Chuy bought this 1986 Buick Regal. With stock white paint, rims, and hydraulics, he began riding and showing his Regal.

Chuy’s car ended up displaying between two candy painted Cadillacs at a car show in Corcoran, California, that were featured in LOWRIDER Magazine. He noticed that everyone would take photos of the cars in front and behind his. “It didn’t bother me until my 5-year-old daughter asked me why no one looked at her car. That really choked me up and I promised her that we would do everything we could so people would notice her car.”

Soon after that, Chuy and his wife Molly sent the G-body to Trends Auto Body in Bakersfield, California, to begin its transformation. After receiving the Le Mans Sunset Orange with metallic orange paintjob, it received some leafing and striping by Curly’s Pinstriping in Paramount, California. The next stop was to take it to Alberto Herrera in Visalia, California, for one-of-a-kind murals. “We needed to come up with a unique theme before taking it to Alberto. My wife suggested going with an Egyptian theme and once we heard the song Egyptian Lover we knew it would be a perfect theme.”

Next stop was a custom interior with center console and bucket seats by California Upholstery in Bell Gardens, California. Finally Alberto Tapia installed the setup, Lugo’s Engraving and Edgar Castaneda did the engraving and the chrome was done by Moreno’s in Fresno, California. After 18 months of work, the car was completed and it accomplished everything it was set out to, from gaining notoriety at shows to getting featured in LOWRIDER Magazine. “My brother always told me ‘magazine or bust’ and now it’s a great accomplishment for two brothers from a small town to be featured in LOWRIDER. I want to give a special thanks to my wife who has always been supportive and to everyone that had a helping hand in building Egyptian Lover.

Sound
Pioneer deck, with all Cerwin Vega speakers and amps. The sound system consists of a 600-watt amp to power four 5-inch mids and an 800-watts amp to power two 10-inch subwoofers.