Newsletter
Sign Up today for our FREE Newsletter and get the latest articles and news delivered right to your inbox.
Home » 1979 Chevrolet Malibu – Ladies First 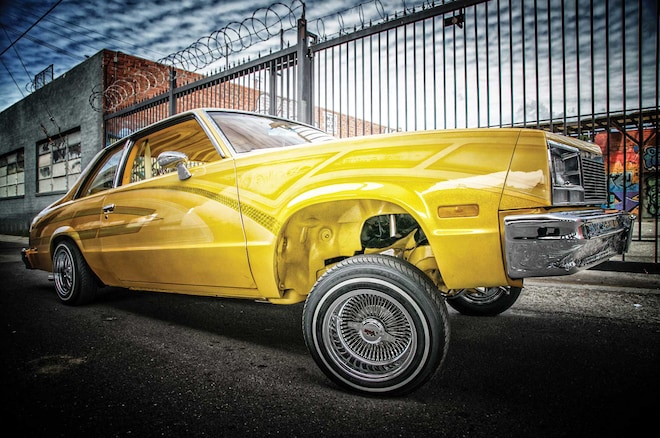 With car show season upon us, many of you will drag your wife or girlfriend to every show you attend with the majority of them merely there for support. Fortunately, the past few years has seen a rise of not just female attendees, but more importantly, female participants. After one particular show, Lupe Barreras told her husband Jose that she’d decided she no longer wanted to ride shotgun with him, but instead drive alongside him. So with help from her husband and fellow HighClass Car Club members, Lupe was off to give her 1979 Chevy Malibu a touch of “high class.”

In a car club dominated by full show cars, she knew she had to stand out. So the Malibu was sent to ColorWorld where they would lay down the car’s vibrant House of Kolor Sunrise Pearl Gold found throughout the vehicle. Curly’s Pinstriping would apply custom patterns and pinstriping variations with colors such as Sunburst Orange and Pegan Gold pearls just to name a few. California Upholstery was the only option for when it came to the interior. Joe at California would install a complete custom interior with powered Lexus bucket seats, which were covered in array of yellow leathers contrasting the vehicle’s lively exterior. With the accenting engraved trim, custom murals, and the mandatory Dayton wire wheels in place, it was finally time for Lupe to cruise her own lowrider.

“Thanks to everyone that helped out,” says Lupe. “But special thanks to my husband, Jose, for helping me complete my car and giving me a taste of the high class.”