Newsletter
Sign Up today for our FREE Newsletter and get the latest articles and news delivered right to your inbox.
Home » 1979 Cadillac Le Cabriolet – Purple Rein 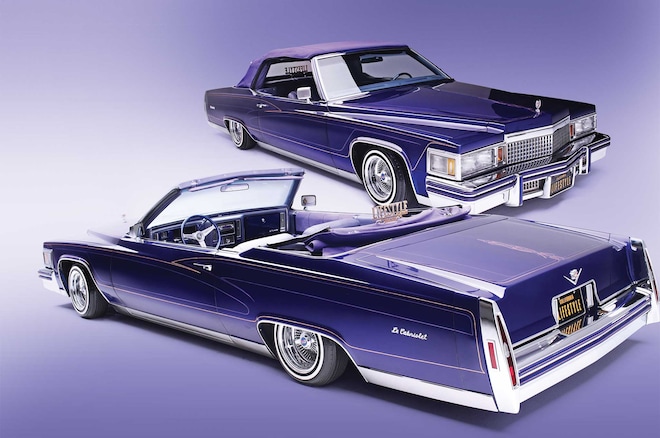 Cadillac Le Cabriolets sort of marked the end of an era. Extravagance and large-body cars were losing out to tighter regulations, more economical cars, and the rising price of fuel. Most regard Cadillacs as the kings of the road and if you had the scratch to be able to afford one of these convertibles back in the day, you certainly had money to burn. It’s increasingly rare to see many that didn’t end up in the wrecking yard. Thankfully Eduardo Gonzalez was able to save one from the scrapheap.

After seeing a similar car that a friend owned, Eduardo decided that this was the car for him — if he could ever find or afford one. Thankfully after searching enough he found one on Craigslist, and get this…his dad decided to pick up the tab for him as a present. Now that finding his car became a reality, tracking down parts and deciding on modifications became the next order of business.

It still retains its 425ci powerplant and trans. Juice for the hydros is doled out through a double whammy Pro Hopper pump, Pro Hopper dumps, four solenoids, 8-inch cylinders in front, and 10-inchers in the back. Work was done by Camino Real Collision Center in Pico Rivera, California. Four AC Delco batteries bring everything to life, including the Sony stereo system with two 6x9s in back and 5 and 1/4s in front. It’s all rolling on 100-spoke 13-inch Daytons with 5.20 Premium Sportways.

Inside, the dash has been decked out with ’90s Cadillac digital gauges. California Upholstery in Bell, California, recovered the original seats in leather and suede in purple and blue to mimic a 2008 DTS pattern. A Nardi Torino wheel completes the package.

After experimenting with a few different colors including red, Eduardo and his fellow club members discussed things and decided to go with the bluish purple you see here, which is actually House of Kolors Cobalt Blue. The paint was laid down by Georgie “G.LA” Gomez. Danny D added the pinstriping and additional accessories include Fleetwood chrome rockers and shaved keyholes.

After five years or so, Eduardo finally got his dream car on the road and future plans may call for detailing the trunk, hood, and undercarriage a bit more, but for now this rolling royalty is out reining the freeway once again. Eduardo thanks his Lifestyle club and close friends for helping him with the build, his wife Teresa, parents, and four daughters who supported him in the build.