Newsletter
Sign Up today for our FREE Newsletter and get the latest articles and news delivered right to your inbox.
Home » 1972 Chevrolet Caprice – Serial Thriller 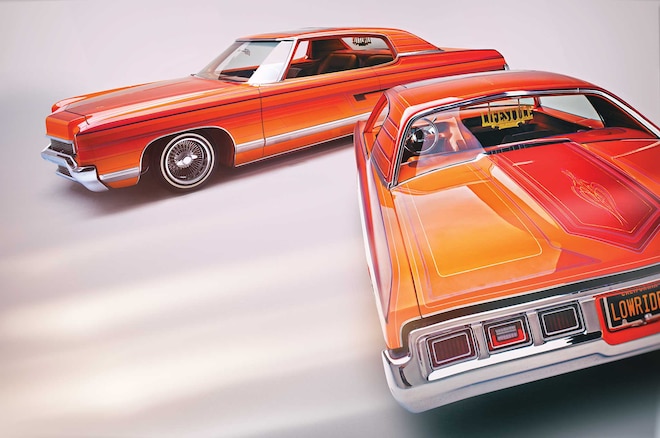 We’re all aware of how many people think that fixing up an old car and putting more money into it than you’d get out of it is a form of insanity. That may be true, but it’s a diagnosis we’re all OK with, particularly since we believe most of the people who say that are crazy for buying newer cars that hold their value about as well as Cabbage Patch Kids. As is often the case with these builds, things tend to spiral into a direction we hadn’t previously anticipated. While things may get a little crazy, when it’s all done we can look back and be happier with the finished product than what we’d initially set out to create.

By his own admission, Peter Fekete’s “Serial Killer” ’72 Caprice “got a little crazier” than what he thought he’d end up with when the build got underway. You’re probably wondering where the name came from and if there’s a body in the trunk, but more on that later. It did indeed get a bit out of control, but it definitely stands out as both one of the less common years of Caprices on the road, and also a true old-school lowrider.

Powering the Caprice is the original 400 small-block V-8, candied in the same exterior paint and dressed up with plenty of chrome, a new Edelbrock carb, and headers that are plumbed into Flowmaster mufflers that are cut right before the axle. It’s all tied to a 700-R4 trans and stock front discs along with rear ABS discs to keep the Daytons coming to a quick stop.

Underneath, the car has been lifted slightly with a chrome undercarriage, belly pan painted, and powdercoated frame. A Pro Hopper setup consists of two pumps hardlined to three Adex square dumps, 8-inch cylinders front and back, and five batteries. Work was done by both Chuck and Tim Rodriguez. The stock rearend was shortened to clear the skirts and done by Cooks in L.A.

The interior is definitely a lesson in insanity and has a lot going on. With sort of a drag bike theme, the center console was made from a Harley split tank and has a console to conceal the switch panel and Clarion stereo. A custom billet grille fills the cluster area where the Dakota Digital gauges reside. It’s all sitting above a chrome stock column and Colorado Custom wheel. The all-leather interior is accented by metal panels throughout. Front seats came from an ’01 Infiniti and the rear seats are custom made. Work was done by Henry’s Interior with The Dragon Shop doing all the metalwork.

Since there isn’t much aftermarket support for Caprices of this era, Peter opted to get rid of much of what he couldn’t find and give it a cleaner look. Side mirrors, keyholes, exterior door handles, and various moldings were ditched and the body was treated to an orange pearl base by Pete Caldera with pinstriping by the late Walt Prey. A 42-inch sunroof was added, along with molding the bumpers and under the hood.

Peter would like to thank his wife Angela, Pete Caldera, Tim Rodriguez, and especially his mom for giving him the support to finish Serial Killer. And as far as that name goes, there was a time when a dead body was found in the house directly across the street from Peter’s mom’s house. Peter was seen by friends and club members in the background of the news broadcast covering the event, and ended up earning that nickname, which he also gave to his car. The both of them are now at large, roaming the streets of Southern California.
Arguably one of the best luxury-designed Caprices.

Sound System
Pioneer Clarion, 6x10s in the back, 10-inch subwoofer

Along with the big news of 1972 being the Watergate Scandal, John DeLorean leaving GM to start his own company, and the premier of The Godfather, big cars were about to become a thing of the past. With stricter regulations being passed and the Arab Oil Embargo that happened the following year, the Chevy Caprice was one of the last of its kind. A two-door version like this tipped the scales at about 4,100 pounds and cost around $4,026. The ’72 Caprice received an updated grille that was lower than those on the ’71 models and given new bumpers with a stronger “bumper within a bumper design.” The rear had the triple taillights now mounted in the bumper. Engine offerings were the same as 1971 with the change to “net” horsepower ratings, including 170 hp for the standard two-barrel 400ci Turbo Fire V-8, 210 hp for the four-barrel Turbo Jet 400 big-block V-8 (which was actually 402 ci), and 270 hp for the four-barrel dual exhaust 454ci Turbo Jet V-8. New to the Caprice lineup was a pillared four-door sedan, which had a front design similar to the ’67-’70 Eldorado.