Newsletter
Sign Up today for our FREE Newsletter and get the latest articles and news delivered right to your inbox.
Home » 1968 Chevrolet Impala SS – Black on Black Comeback 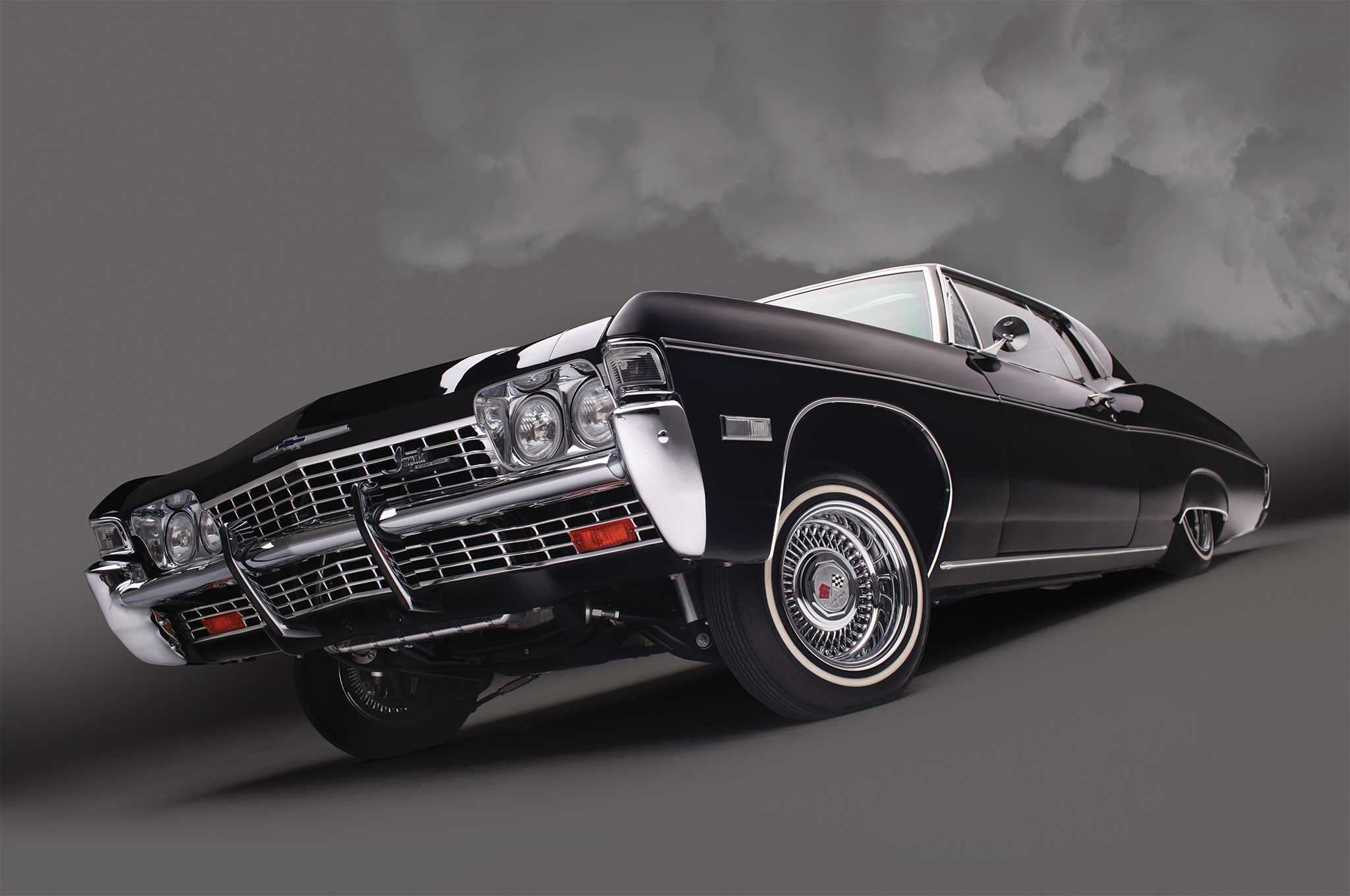 If you’ve been following our Project FearleSS, you’ve probably been wondering when the final result would be unveiled. Well, here it is in all its glory. The car was found on Craigslist in Las Vegas in pretty tired shape, so we knew we had our work cut out for us. We put our heads together and came up with what we thought was a simple, understated, elegant, and functional interpretation of a ’68 Impala SS resto-mod. It’s definitely an exercise in the less-is-more concept.

First off we needed a drivetrain we knew was reliable enough to haul this car around, but give us the ponies we wanted. The Connect & Cruise Chevrolet Performance LS3 was fitted with an Airaid U-Build-it custom air intake, Holley Performance oil pan, Classic Performance Products headers, CPP mounting brackets, and Aeromotive Phantom fuel pump system. With the help of a CPP transmission crossmember kit, it’s all tied to a 4L65E transmission and an Inland Empire Driveline shaft turns the Currie rearend. The spent fumes exit via a MagnaFlow stainless exhaust system and it’s all kept cool with a US Radiator.

And we wouldn’t be true to form unless we can put this car on the ground. When we got the powdercoated frame back from Millennium Powder Coating, Engle Brothers took care of lowering our altitude. The underpinnings consist of a RideTech suspension and Universal Air Suspension airbags powered by VIAIR 480 200-psi dual compressors that flow through an AccuAir VU4 4-corner solenoid valve unit. QA1 shocks and Energy Suspension bushings keep everything suspended. The entire trunk and interior was lined with Dynamat to keep the noise down. The Truespoke wheels wrapped in Coker rubber come to a stop thanks to a CPP disc brakes and their Hydrastop brake system.

Our interior was recovered in Mercedes black leather by Distinctive Industries and installed by Carlos Custom. Our Dakota Digital gauges sit above an ididit chrome column with a Shiftworks cable system. A New Port Engineering wiper kit ensures our Classic Industries windshield stays clean; the rest of our windows are also Classic Industries, as well as the ignition switch, interior lights, bezels, trim, interior garnishes, window switches, emblems, moldings, and weatherstripping. A Restomod A/C system keeps us cool while we listen to tunes through the JL Audio system and stay safe and snug thanks to Julianos seatbelts. An American Autowire system installed by Custom Dimensions keeps all the power coming from our Optima battery circulating well.

While we decided to keep things monochromatic on the outside, you must admit that it’s pretty hard to make a solid-black car look any better. After the body was disassembled by House of Pain, sandblasted by Millenium, and bodyworked back to perfection by Luis Lemus and Jesus Coronel at House of Pain, we called upon Steven Chaparro to lay down the Axalta gloss black paint and he did an awesome job giving it a mirror-like finish. The custom 44-inch moonroof was installed by Sunroof Performers.

From desert find to midnight oasis, this ’68 has come a long way thanks to the people and companies involved. Just goes to show you that there’s nothing out there you can’t find to bring a classic like this back to life with a vengeance. Go to our Facebook page and let us know your thoughts on Project FearleSS or maybe some touches you would have added or like to see in the future on another build.

At this point, the 1960s were really reaching a head. Elvis Presley returned from a long stretch of forgettable movies to music with his ’68 Comeback Special TV program. Martin Luther King Jr. and Robert Kennedy were assassinated. The Vietnam War was in its sixth year with the Tet Offensive being launched. Apollo 8 became the first manned spacecraft to orbit the moon. If there were ever a time for change, it was certainly happening all around us at that point. The Impala Super Sport no longer had their own series, but the SS option could be added to Impala couples and convertibles for $179. The full-size Chevys also got a new front end for 1968 as well as an updated rear bumper and horseshoe-shaped taillights. Retractable headlights could be added for $79 to the Caprice, but few buyers opted for this feature. Only 38,201 Impalas were made in 1968 with the SS option, including 1,778 with the Z24 (SS427 package). The Z24-packaged cars are extremely rare and difficult to recreate due to an absence of aftermarket trim parts to replicate the originals. Our Project FearleSS car originally came with a 327.