Newsletter
Sign Up today for our FREE Newsletter and get the latest articles and news delivered right to your inbox.
Home » 1967 Chevrolet Impala – Flashback Fastback 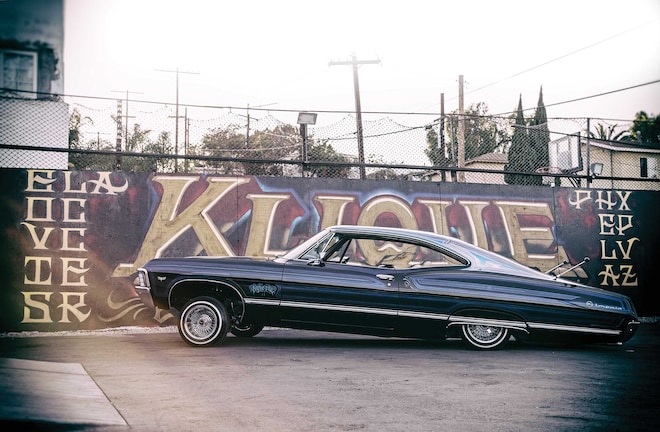 People’s misfortunes can often lead to life-changing moments in our own lives. Such is the case with Dyse One of San Diego, California, who bought a 1967 Chevy Impala fastback from a friend who was preparing to leave on an extended stay to “college.” For years, this car sat and would become nothing more than a primered street cruiser for Dyse One. He would go on to sell it as well. Having always regretted the sale, he set off to find another fastback and, with help from his wife, he would soon be the owner of another ’67 Chevy Impala…only this time he was ready to give it the full Klique Car Club treatment.

The project would begin with a trip to 760 Kustom where Tiny would install the custom Black Magic two-pump setup with four dumps and six batteries. From there, this fastback was off to visit the Riviera Brothers, who would team up with Manny Cisneros to create this black candy base paintjob, featuring numerous custom gray metallic patterns, as well as layers of blue faded tape shade combinations and miles of fine-line pinstriping.

He decided to keep the interior semi original and resurrected the black-on-black stitched seats with vinyl and cloth inserts and added an updated digital dash cluster and Pioneer head unit. With all the existing metalwork chromed and polished and the Chevy small-block 350 overhaul nearing completion by John Alley and crew at Muscle Car Alley in San Marcos, California, it was finally time to bolt on the all chrome custom Zenith wire wheels with 5.20-13 Premium Sportways tires. Dyse One’s latest creation has become a fixture on the San Diego streets just like many of his one-off custom murals as well as his clothing line aptly named Dyse One Clothing.

Projects of this caliber can only be completed with the help of great friends and family says Dyse One and so special thanks are in order to all his fellow club Klique Car Club members and of course to his beautiful wife for helping him turn this dream into a reality.

The body style of the new 1967 Impala was redesigned to give this car a longer look. The rear quarter panels took on a rounder, fuller look as well. This look became known as the “coke bottle” look.