Newsletter
Sign Up today for our FREE Newsletter and get the latest articles and news delivered right to your inbox.
Home » 1967 & 1968 Chevy Impala Convertibles – His & Her Rags 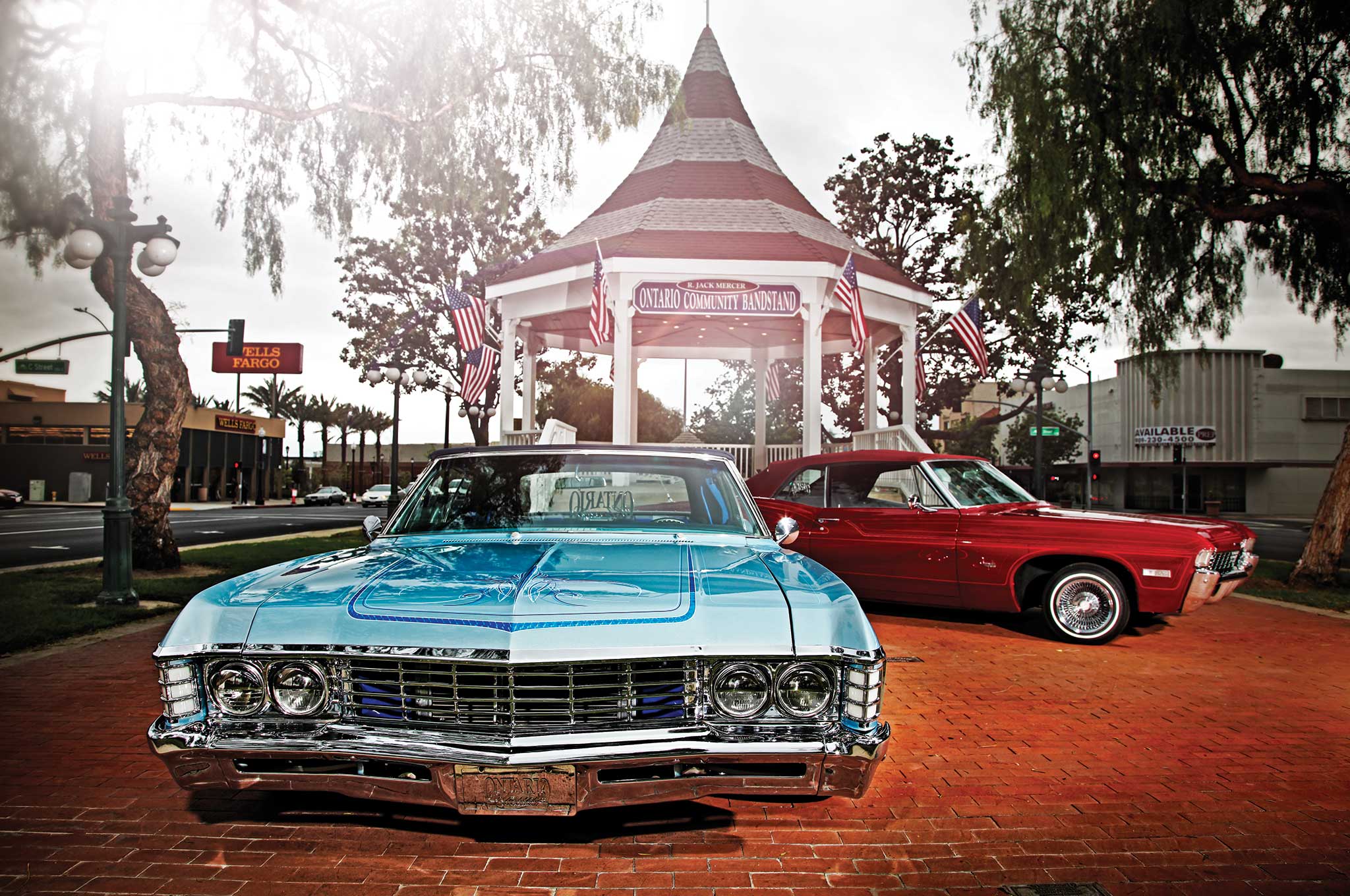 Attending a car show as a teenager with his older sister is what made Jose Escalante of Ontario, California, fall in love with the lowrider lifestyle. He developed a passion for the curves of ’67 Impalas.

The car shell sat in the backyard at Jose’s best friend’s house for years, until he built up the courage to fully restore it. Jose had envisioned his dream car before he laid a hand on it. That vision gave him the motivation to tackle the enormous task. “When I finally pulled it out, it had trees and bushes growing all around it and through the engine compartment,” he says. His first stop was his uncle’s shop. There he used the hoist to pull the body from the frame. Once it was apart, he began hunting down the countless missing parts. “I didn’t have much to start with and with a wife and six kids, I knew it was going to take some time.”

Jose had Neftali Fabela of Ontario assemble his 350 engine. With CFR Performance being from his hometown, Jose decided to load up his ’67 with CFR parts that included the dress-up kit, alternator, and numerous other parts. The body was then sent to Empire Collision in Upland, California, where Marco A. Cardenas Jr. handled the bodywork. With the bodywork ready, Arturo Cardenas laid the PPG pale blue with blue flake and blue pearl on the convertible. Jose then took it upon himself to add the murals at his Tricks Art Shop. Mike Lamberson of Draggin Lines in Riverside, California, added candy blue over the silver leafing and dragged lines throughout the ’67’s curves.

Jose then installed the stereo system by himself and had his friend Ernie Hernandez help him install the ididit wiring kit. Luis Delgado of South Cali Upholstery in Ontario, California, used navy blue, royal blue, and sky blue in custom patterns throughout the interior and trunk. Edgar Engraving and Jaguar Chrome & Polishing added the final touches. Jose’s two-year project was nearing completion at the time the LOWRIDER Magazine Las Vegas Super Show was coming up. “It was very memorable to see how all the car clubs came together to help me finish the car the night before the show. I didn’t sleep that night until the car was loaded on a trailer and ready to debut in Vegas.”

With the ’67 completed, Jose and his family started attending more car shows. Unfortunately, the car doesn’t have enough room to fit the family of eight. “I suggested to my husband that we needed a second lowrider to fit the entire family when we go to shows,” explains Gaby Escalante (Jose’s wife). “I thought it would be nice for him to ride with the boys and me to ride in a matching convertible with the girls. Needles to say, I didn’t have to tell him twice.” Jose began the hunt for a second project immediately. Ernie, a friend of the family, found this ’68 convertible in Santa Maria, California. “I remember driving it around town the first night they brought it home and how he began the build the very next day.” Gaby gave Jose her vision for the ’68 and he fulfilled her wishes. Ricardo of Lucky Auto Restoration did the bodywork and prepped the car for paint. Jose painted the car himself. He went with a candy brandywine as it’s her favorite color. “I finally got to drive it a year later when it was complete and we now ride to car shows as a family.”