Newsletter
Sign Up today for our FREE Newsletter and get the latest articles and news delivered right to your inbox.
Home » 1965 Chevrolet Impala Wagon – Outside the Box 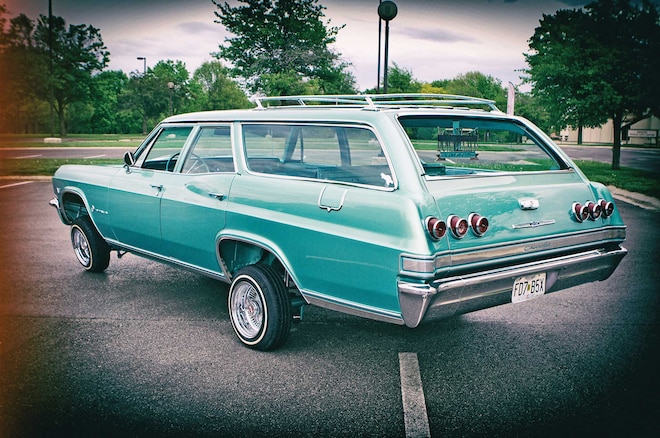 If you were a kid growing up and your parents had one of these station wagons that you got brought back and forth to school and little league games with, you might have felt a little embarrassed. Who knew that these big station wagons would go on to be sought after since they’re a bit more unusual and comparatively uncommon to what we see at shows now. We love it when we see people save these from the scrap heap and break from the traditional sport coupe versions of Impalas. While it may have felt like a chop to have owned or ridden in one back in the day, Woody Moldenhauer’s ’65 Impala wagon is living proof that many of us probably wish mom and dad had held onto that old wagon.

Woody got a heads up about an ad for this wagon from a fellow Down IV Life Car Club member. The price was right and, since it was essentially a one-owner car that’d been taken care of, it was about as rust free as one could want on a car this old. After bringing it back home in its stock white color, the original plan was just to keep it as a driver, but one thing led to another. The idea to repaint it in another factory turquoise color was the flashpoint that segued into painting the belly to match and chrome out the underpinnings instead of keeping them black. So the idea to keep it as a driver kept moving forward toward a clean lowrider platform.

The belly was split and frame given a full wrap with extended ’64 Chevy upper arms and stock lower arms. New trailing arms were also dropped in with adjustable uppers. Two Pitbull pumps, Adex dumps, and 8-inch cylinders all around are powered by eight batteries. The back cylinders are custom reverse stroke with powerballs on the bottom that have deep cups to keep it from going into the body.

Under the hood still resides the original 396, rebuilt with an Edelbrock intake and carb, and aluminum radiator. The original trans was exchanged for a 350 that Woody is contemplating replacing with a four-speed one day. The interior was given a fresh stock appearance with a factory-appearing radio that powers modern components.

Outside, the body was given extra attention. Not only was it treated to House of Kolor Artisan Turquoise with all the seams welded up and pearl patterns on the roof, but the extensive wet sanding and nine coats of clear make it really pop. You won’t find any waves on this car. All bodywork was done by Woody’s brother-in-law and rolling on 13×7 Zeniths gives it just the right touch.

Woody would like to throw out a thank you to Justin Askew, Jamie Shelley, and the rest of his Down IV Life club. Unfortunately Jamie passed away and Woody has assumed the helm on some of his projects. We wish him well with the completion and look forward to seeing the finished products as well as this land yacht of a wagon out on the road.

In 1965, the first combat troops arrived in Vietnam for what began a long war. On the civil rights front, the Selma demonstrations were happening in Alabama. My Fair Lady won Best Picture. Change was all around us and the Impala entered its fourth generation with totally new styling. Although it later became legendary, 1965 was the last year for Chevy’s 409 block, which was replaced by the 396, the second biggest block offered that year. The X-frame on GM full-size cars was now replaced by a full perimeter frame. And the Caprice option was now an upgrade to Impalas. It was also Chevy’s highest selling year of the decade. Impala wagons could be had with a V-8 or inline-six, but were only available as four-door versions. The configuration for wagons could be the standard six passenger or people could opt for the nine-passenger version with a rearward-facing bench seat. No SS option was available for the wagon. This six-passenger V-8 option wagon would’ve run you about $3,078 back in the day.