Newsletter
Sign Up today for our FREE Newsletter and get the latest articles and news delivered right to your inbox.
Home » Lowriding in the Middle East with a 1964 Chevy Impala 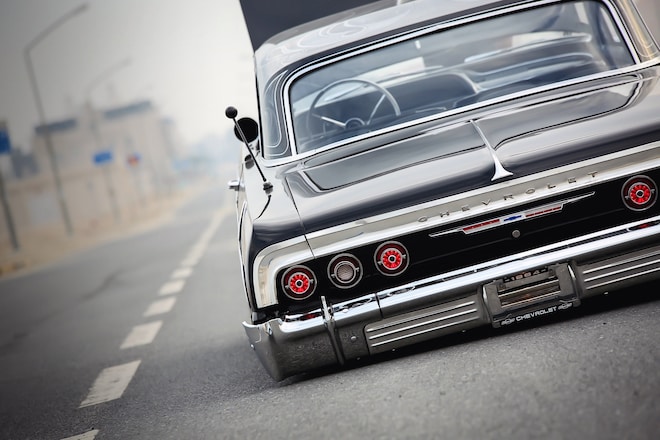 Every custom lowrider has a story to tell, but for this 1964 Chevy Impala, the story takes place almost 8,000 miles away. Growing up in the US, and having lowriders as part of our everyday lives, we sometimes  forget that the rest of the world is watching as well. What seems like a lifelong norm to us, can serve as a pipe dream for kids in other countries who don’t have car shows and cruises every weekend.

Such was the case for an eager teenager from Kuwait, who’s fascination with lowriders was sparked in the 90s when Dr. Dre and Snoop Dogg dominated airwaves and televisions worldwide. Their wildly popular music even reached the Middle East. With these videos boasting custom drop top Impalas that actually hopped to the music, Abdullah Qasem’s love for lowriders was born. Coming from a family who was mainly into drag-racing and muscle cars, Abdullah broke the mold and dove headfirst into learning everything there was to know about lowriding.

Although lowriders had only started to show up at Kuwaiti car shows, having been imported by students who had just returned from studying in the U.S., what Abdullah had soon realized was that no one was actually building any lowriders in his country. The random 2-3 cars per show were imported. At 15 years old, he discovered an online forum called LayItLow.com, and he set out to learn everything he could to start   building his own lowrider.

Soon, his preoccupation with lowriders got in the way of his studies and his parents realized they needed to use car parts to motivate him to finish school. In 11th grade, he caught sight of a car he’d never seen before – a Cutlass – and he chased it down to find out what it was. That car inspired Abdullah to ask his parents for a 1985 Cutlass, instead of the usual fancy car most kids his age were asking for. His parents dangled hydraulic pumps for his build in front him as incentive to focus his efforts on graduating. It worked…

By 2004/2005, the lowrider movement grew in Kuwait, thanks to the internet and the booming YouTube generation. Abdullah began corresponding with Norma at CCE, and he began ordering parts from the U.S.-based company to start on his building career. With the help of a local builder named Nassar, they built their first car in his backyard, then coached the fabricator on the chop, and even rebuilt it after his first cruise. They used diagrams from the internet for the rebuild and, with it, began growing the lowrider culture in Kuwait.

While attending college, Abdullah began to make money by organizing car shows. After graduation, he went on to host a television show focused on cars, similar to the U.S. Top Gear show. In 2011, he was finally able to travel to the U.S., Chicago specifically, to meet with lowriders from Damage C.C. He took in as much knowledge and information as they would offer him. A subsequent trip to California would result in meeting the crew at Hoppos, along with local car scene heavy hitters, and he would learn more about lowrider history and its origins. He would then bring Hoppos, and his newfound knowledge, back home with him and introduced the new hydraulic systems to Kuwait, United Arab Emirates, and Saudi Arabia. He went on to build many more lowriders and pave the way for even more to be built.

His most recent project, this ‘64 Impala, was customized in Arizona by the crew at Miranda’s Customs, then shipped back to Kuwait where it would set the bar for the custom car scene in all of the Middle East. He is now doing frame-off, full customizations like a pro. His work in the lowriding world within the Middle East has earned him the reputation of mentor and frontrunner for the scene. What all started as a teenage fascination of a culture far, far away, has now become a full-fledged movement and subculture that Abdullah Qassem can be proud of.