Newsletter
Sign Up today for our FREE Newsletter and get the latest articles and news delivered right to your inbox.
Home » 1964 Chevy Impala Convertible is the Rolling Contender on the Vegas Strip 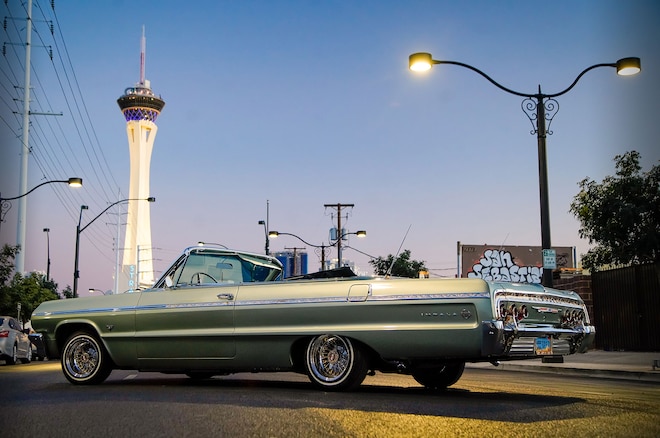 As kids, we tend to have a multitude of dreams and aspirations for when we grow up. We make promises to ourselves and imagine what we’ll have as adults. Many of those dreams get forgotten as we grow older and new goals are formed. But for a small few, their goals grow up with them, and remain the proverbial “brass ring” for what success looks like to them.

This was the case for a young Caleb Plant, whose childhood was full of admiration for classic cars and restoration projects. His father would share in the love for these works of art on wheels and together, it became a fascination that would remain well into adulthood. As a young fan, Caleb promised himself that someday he’d own a ‘64 Impala.

Fast forward to years later and Caleb’s hard work and determination brought him to the forefront of boxing’s future superstars. Winning the 2011 Golden Gloves at 19 was only the beginning. After turning pro in 2014 and garnering a record of 20-0, he realized that he was finally in a position to fulfill his childhood promise to himself. That is when he reached out to his friend, Rick at Switch Hitters Hobbies, to help find the perfect project car. After reviewing different options and feeling like none of them were up to the standards that Caleb held for everything in his life, Rick finally offered him a ‘64 from his own collection to become the car you see now.

The crew at Switch Hitters in Las Vegas, NV set out to build a car worthy of the boxing champ’s winning high standards. They installed a 327 Performance engine with an Edelbrock 650 carburetor, Sand and Block Huggers, as well as a Magnaflow exhaust system. The shop also took on all the bodywork, paint and chrome for this project, including laying down the original Prospray 1964 Impala Laurel Green to give it that true classic finish.

After chroming all the trims and moldings, the most difficult task of engraving them was left to the talented crew at Krazy Kutting in Yuma, Arizona. Lastly, the replica Ciadella Laurel green interior was installed by Wizards Upholstery, finalizing the process for this rolling contender.

For Caleb Plant, this ‘64 is so much more than just a shiny toy – it’s the artistic representation of how hard he has worked for everything in life to get to where he is now. It’s the fulfillment of a promise a little boy makes to himself and the prize of his achievements. It’s finally having something worthy of a Lowrider feature. But even more rewarding is the joy and satisfaction he and his friends get when they cruise down Las Vegas Blvd, feeling like kings and champions.