Newsletter
Sign Up today for our FREE Newsletter and get the latest articles and news delivered right to your inbox.
Home » 1964 Chevrolet Impala – Brown-Eyed Girl 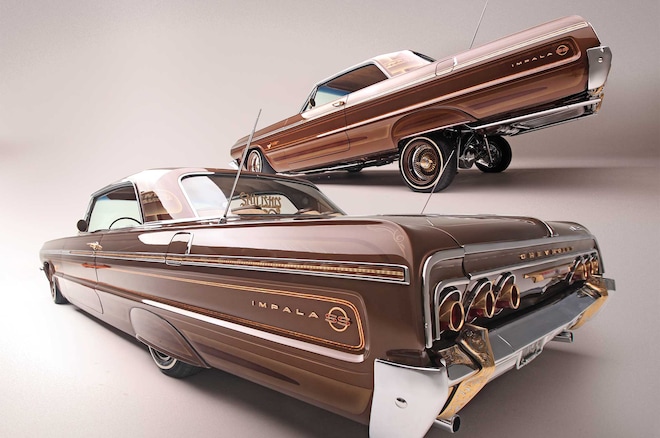 Color choice on your car can be one of the hardest aspects of a build. You want something that looks slick and stands out from the rest of the crowd, but also speaks to your personality. It can often take months of experimentation and thousands of dollars to get what’s in your mind’s eye done right. And that’s only the beginning. Once it’s decided, the domino effect of pulling all the other aspects together to complement the shade you’ve decided on is a whole ‘nuther task.

Let’s face it, we don’t see a lot of cars done in brown. You’ve got to do it right for it to really catch your eye. Ciji Ulloa bought this car as a stock ’64 and restored it to original, but was then tempted to take it into lowrider territory. When it was decided he’d do it up in brown, he tore it all down again, and with the help of his friends and fellow club members in the Stylistics Car Club, Ciji came up with what you see here. From the gold trim, to the pinstriping and leafing to the two-tone interior, we think he pulled off quite a subtle beauty.

Powering “Mi Morena” is the 350 it came with, dressed up with some bling. The Powerglide was ditched in favor of a 350 trans. Rick at Low Life in Inglewood, California, installed the Whammy pumps with two dumps and six batteries to keep all the juice flowing. The A-arms were molded, but since the frame is a stronger Canadian unit, further mods weren’t necessary. A chrome rearend along with a host of other shiny accessories keep the undercarriage looking good. It’s all rolling on 13-inch Chinas with engraved gold and chrome knockoffs.

Walter at West Coast Auto Body laid down the custom Walnut Metallic Brown, which was followed up by some fine pinstriping, leafing, and graphics by Curly in Paramount, California. Carlos at Salas Engraving handled the engraving on the door handles, bumper guards, mirrors, and wheels. Gold trim was applied by Speedy’s in Long Beach California, while chroming duties were done by Anaheim Plating.

The suede and vinyl upholstery along with the fiberglass work in the trunk and kick panels was handled by Big J in Paramount, California, and makes for a slick color combo to accent the exterior. Pulling all these aspects together didn’t just happen alone. Ciji thanks Angel Ibarra and members of the Stylistics for helping him put the ride together. He also gives props to his family for being patient with him while it took a lot of long hours to build. We’ve got to say this is one ride that’d make any doubters of using brown on a car fans of this finished product. Just goes to show you that you can make any color look good with the right combination of elements.